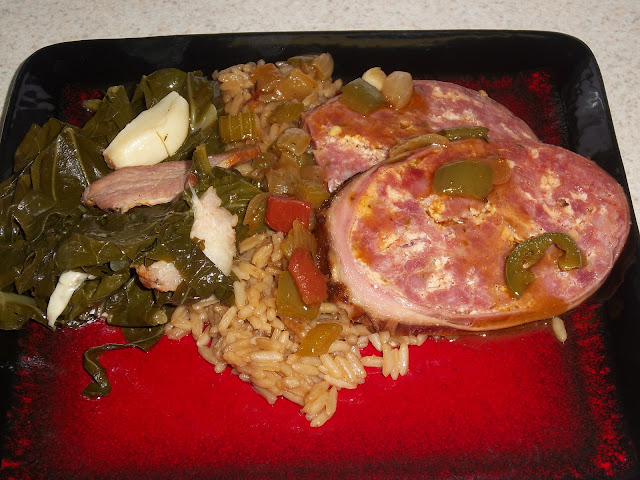 I'm what's called a transplanted Yankee. I was born and raised in the heart of New York City and moved to Florida when I was about 20. The point of this story is that until I moved to Florida, I had never heard of, much less eaten, collard greens! As I'm willing to try almost anything, I tried collards in a few restaurants and wasn't overly impressed. Then I made a batch or two of what I like to call Yankee Collards! Maybe that's not a real name, but I still have Yankee blood runnin' through my veins, and I was the one cookin' them, so that's what I call 'em.

I've always used either leftover ham to season the greens or bought a ham steak if I didn't have a nice meaty ham bone lying around. And while I've always thought my greens were delicious, the last batch I made absolutely shattered the taste barrier! Why was the last batch so much better than all the other batches, you ask? Simple. One word. Tasso!  And just what is this tasso, of which I speak? It's thick strips of pork, usually Boston butt, rolled in Cajun seasoning,and then smoked. It's mostly used for seasoning purposes. And where can a person get some of the best tasso on the planet? Teet's Food Store in Louisiana. They make it there, and have made it for years and years. You don't live in Louisiana, you say? Then simply go to Teet's Food Store,where you can find all sorts of Cajun deliciousness. Here's my Collard recipe!

Wash the collards well, making sure to remove any sand that might be on them. Chop the greens into about 1-inch squares. Pour the chicken broth or water into a large pot. I use my stockpot,because there's quite a bit of volume in a bunch of collards. They will cook down quite a bit, I just don't like to crowd them as they cook. Now, layer some collards over the broth, then add some garlic cloves and some Tasso, repeating the layering until everything's in the pot. Season with the crushed red pepper and Slap Ya Mama. Cover and bring to a boil. Turn down the heat and simmer for about an hour (less, if you like the greens a little crunchy, or more, if you like 'em really soft).
37 Cooks members receive products from our sponsors to work with to create their posts; no other compensation is given. All content is solely the opinions of our members. Members also write non-sponsored posts that do not feature any products. These are not compensated in any way..