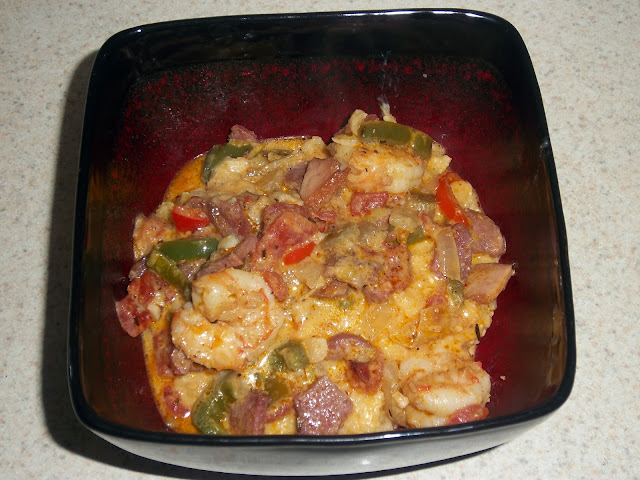 I've had shrimp and grits before, made with bacon, and I thought they were quite tasty. Today, I made shrimp and grits with pure pork tasso instead of bacon. I never thought I'd say this, but step aside, bacon. Tasso's here to stay!  Teet's Food Store in Louisiana generously sent me some of their Pure Pork Tasso, and my shrimp and grits ain't never gonna be the same!

Melt the butter in a large saute pan. Saute the peppers and onions. Add the tasso, Rotel tomatoes and SYM seasoning. Cook down until the juice from the tomatoes is reduced by half. Add the shrimp, stir and cook for about 3-4 minutes. Don't overcook the shrimp. When the shrimp are just about done, add the heavy cream, mix well, and heat to just under a boil. Serve in a bowl, over the cheese garlic grits, with plenty of good bread to sop up the gravy!

Cheddar Garlic Grits:
I had planned for days to cook all day on my day off, with Shrimp and Grits on the menu, among other things. I made a shopping list, checked it twice, got everything I needed from the store, and lo and behold, when I started cooking, I realized I forgot the damn grits! Ran to the store, cussin' myself all the way there and back. I ended up with a big box of quick grits (not the little envelopes).They worked out well. You can use any kind of grits that ya like. The one I happened to grab was Jim Dandy Quick Grits. Here's how I made 'em:

Pour the water and the milk into a pot and bring them to a boil. Slowly stir the grits and salt into the boiling liquid.  Add the garlic. Cover and simmer over medium heat for 8 to 10 minutes, stirring occasionally. When the grits are done, add the cheddar cheese, and stir until all cheese is melted.

P.S. My lovely wife doesn't care for grits. She's from London, and had never heard of grits until she moved to America. The one time she had them was for breakfast, and they were just plain grits, so she wasn't too keen on trying my Shrimp and Grits. To her credit, she'll always try anything I cook, and she loved the cheddar garlic grits!!
37 Cooks members receive products from our sponsors to work with to create their posts; no other compensation is given. All content is solely the opinions of our members. Members also write non-sponsored posts that do not feature any products. These are not compensated in any way..