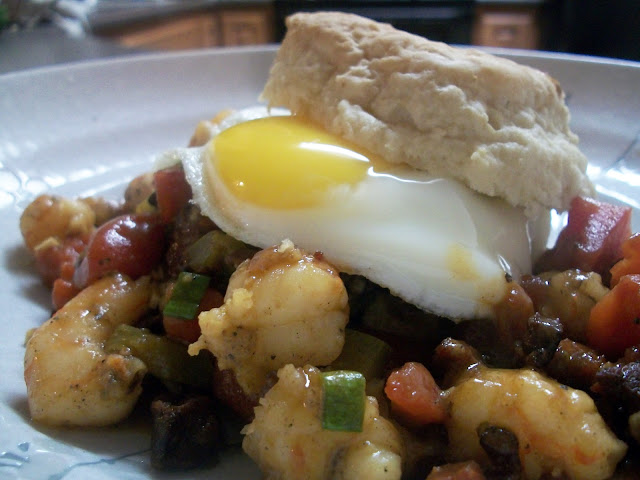 Let me begin by saying I LOVE New Orleans.  The culture, the vibe, the resiliency of the city.  And John Besh is one of my absolute favorite chefs. In his book, "My New Orleans", he returns to his roots and cooks REAL Cajun food, not the deep-fried hot sauce-slathered fare you often find near Bourbon Street.  My husband got me this book when he worked at Sur la Table, and I have cooked several great recipes out of it.  The photography is beautiful, and the book could be displayed as a foodie coffee table book.

This recipe originally called for green onion sausage, but I swapped it out for Teet’s Smoked Jalapeno sausage to give it some heat.  The gravy is best served over homemade biscuits and topped with an oeuf au plat aka a fried egg.

1.  Cook the bacon in a heavy-bottomed pan over medium-high heat (I used a Le Creuset cast iron pan) until you have approximately 1 tablespoon of rendered bacon fat.  Remove the bacon from the pan.
2.  Add the sausage to the fat and cook, breaking up the meat as you go, until it is browned, 12-15 minutes.  Add the onions and cook until they are soft and browned, another 15 minutes.
3.  Reduce the heat to medium. Add the flour into the pan, stirring to mix it into the sausage and onions.  Cook for about 2 minutes to blend the flour into the meat.  This will help thicken the sauce – you want a good chunky sauce, not a runny one!
4.  Season the shrimp with the salt and pepper, then add them to the pan. Saute until they turn pink, about 3 minutes.  Remove the shrimp from the pan and set aside.
5.  Add the bell pepper, garlic, pepper flakes, allspice, Worcestershire sauce, tomatoes, and stock to the pan, stirring well.  Increase the heat and bring the sauce to a boil.  Reduce the heat to low and cook for 15 minutes.  Add the thyme, green onions, and shrimp and cook for another 5 minutes.

Side note:  My favorite biscuit recipe is from Alton Brown.
37 Cooks members receive products from our sponsors to work with to create their posts; no other compensation is given. All content is solely the opinions of our members. Members also write non-sponsored posts that do not feature any products. These are not compensated in any way..