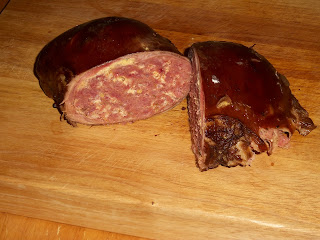 First, I'd like to say that I'm very happy and proud to be a member of 37 Cooks!  We're having a blast with all the cooking challenges! Teet's Food Store in Louisiana was our most recent sponsor. They were kind and generous enough to send each of us at 37 Cooks a package of assorted smoked Cajun meats. One of the meats was something called ponce. Ponce is something that's becoming extremely hard to find.  As far as I can tell, it's a very regional kind of meat, pretty much found only in Louisiana, and even there it's a very localized item. It's a pork stomach stuffed with pork sausage and seasonings, among other things, then cooked and traditionally served over rice. As some of you know, I'm a butcher by trade. As a butcher, I really appreciate this, mostly because meat processed like Teet's ponce is becoming a lost art. I mean, how many butchers do you know who would even know how to make stuff like this? Thanks, Teet's, for keeping alive some old world traditions!

Teet's Ponce with Dirty Rice and Gravy
by Matt Baird

In a cast iron dutch oven, melt a few tablespoons of bacon grease. Brown the ponce all over. Remove the ponce, deglaze the pan with the broth. Lay the celery stalks in the broth. Add the onion and the ponce, cover and bake at 325 for 2 1/2 to 3 hours, until the skin is tender enough to be easily pierced with a fork. Take the ponce out of the liquid, wrap in foil and put aside while making the gravy.

As for the rice, I love Zatarain's Dirty Rice in a box. So you can use that or whatever kind of rice ya like! 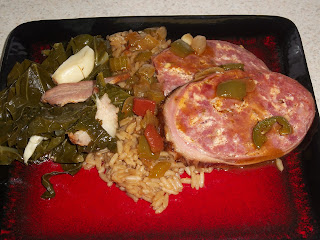 1/2 cup onion,chopped
1/2 cup green peppers,chopped (I like to use seeded jalapenos here.If ya take the seeds and ribs out,they ain't too hot.)
1/2 cup celery,chopped
1/2 stick butter
1 teaspoon Slap Ya Mama Original Cajun Seasoning
All the broth from the ponce, strained and degreased, and more chicken broth to equal 2 cups
About 1/3 cup of a 3 beer roux*

Use the same pot in which you cooked the ponce. Melt the butter and saute the trinity. Add the roux, stir well. Add the SYM and the broth. Since you're using the roux, the gravy should be somewhat thick, or at least have some body to it. Taste and adjust seasoning, if needed. Slice the ponce about 1/4 inch thick and serve over Dirty Rice, with the gravy.

3 Beer Roux*:
Roux is a mixture of half fat (either butter or oil) and half plain flour, cooked together and used as a thickening agent in various dishes, like bechamel sauce, gumbo, etouffee, etc. It starts out white, and gets darker the longer you cook it, hence the name, 1 beer, 2 beer or 3 beer roux. If you want a light roux, cook it till you have finished one beer! And of course, the dark roux takes me 3 beers. Start off by melting the fat and adding the same amount of flour as fat. For example, 1 cup of fat to 1 cup of flour. Cook over medium-high heat, stirring constantly.You don't want the flour to burn. It's said that if the roux looks like there's black pepper in it, the flour's been burnt and the roux is ruined. When making the gravy for the ponce, I wanted a dark roux. The Cajuns say that a dark roux should be the color of an old penny,and that's exactly what I got with mine. I keep the leftover roux in a jar in the fridge, right next to my jar of bacon grease!

Made with love in the USA by Matt the Butcher !

" Laissez les bons temps rouler "
37 Cooks members receive products from our sponsors to work with to create their posts; no other compensation is given. All content is solely the opinions of our members. Members also write non-sponsored posts that do not feature any products. These are not compensated in any way..