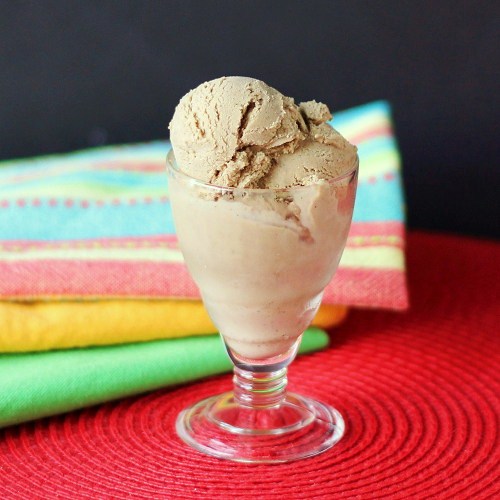 To make the coffee-infused cream:
Place the cream and coffee in a heavy-bottomed pan and bring to a bare simmer - not a boil - while stirring as needed. As soon as you see those bubbles, turn the heat off. Let the mixture cool a bit, then transfer to a storage container (I used a quart canning jar) and refrigerate until well chilled. The longer you let it sit, the more coffee flavor you will have in the cream.

Strain the cream through a very fine strainer. I ended up with just a little more than 2 cups of cream. I used 2 cups for the ice cream and found other uses for the rest.

The cream still had very fine bits of coffee in it, which was fine - but you don't want to leave too much, or larger pieces.

To make the ice cream:
Place the strained cream, milk, sugar, and salt in a heavy-bottomed pan on medium heat and bring to a simmer, then turn off the heat. Beat the eggs lightly in a small bowl. Slowly whisk some of the hot cream into the eggs until you've added about half of the hot liquid to the eggs. This doesn't have to be exact - you just want the eggs to be slowly warmed.

Add the mixture back to the pan, turn the heat back up and cook, stirring, until the mixture thickens. You'll feel a drag on the spoon and if you run your finger across the back of the spoon, the line will remain.

When the mixture is thoroughly chilled (shoot for 40 degrees or below) churn in your ice cream maker according to the manufacturer's directions.
37 Cooks members receive products from our sponsors to work with to create their posts; no other compensation is given. All content is solely the opinions of our members. Members also write non-sponsored posts that do not feature any products. These are not compensated in any way..