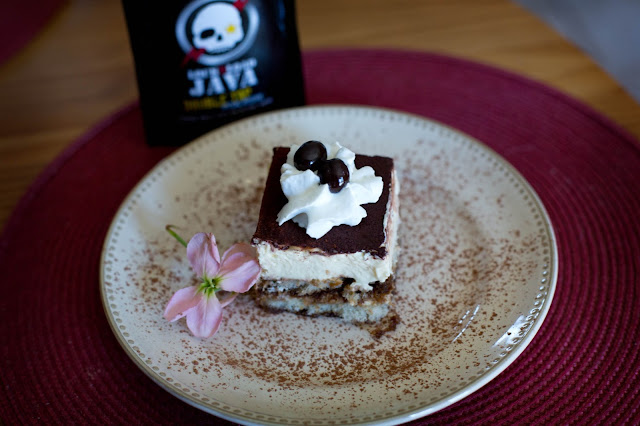 I have been making tiramisu for years, as it is a family favorite, and this recipe always gets rave reviews. If you are looking for that special dessert that will have everyone asking for the recipe -- this is it! Note: This recipe contains raw eggs.

In a large bowl, beat together the yolks and 1/2 cup sugar with an electric mixer at medium speed until thick and pale, about 2 minutes. Beat in the mascarpone until just combined.

In another bowl, beat the egg whites with a pinch of salt until soft peaks form. Add the remaining sugar, a little at a time, beating the whites until stiff peaks form.

In another bowl, beat the cream until soft peaks form. Fold the cream into the mascarpone mixture, gently but thoroughly, then fold in the egg whites.

Stir together the coffee and Marsala in a shallow bowl.

When ready to serve, remove from the refrigerator and, using a sieve or shaker, top with dark chocolate cocoa powder, covering completely. Serve on dessert plates and top with a dollop of whipped cream and a few chocolate-covered coffee beans. Enjoy!
37 Cooks members receive products from our sponsors to work with to create their posts; no other compensation is given. All content is solely the opinions of our members. Members also write non-sponsored posts that do not feature any products. These are not compensated in any way..