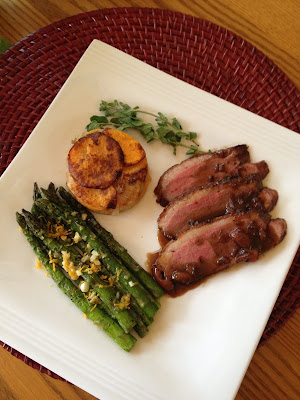 As soon as I signed up for the Lock-N-Load Java challenge, I knew there was one dish I just had to make! Duck!! I make duck often and the only thing that changes is the sauce that goes on the duck. As soon as I tasted the intense flavor of the brewed Double Tap, I decided on cherry. It isn’tcherry season so I wasn’t able to order fresh made cherry preserves from my favorite jam maker. I don’t have a single objection to using store bought preserves, provided they are non-sugar laden preserve. For this recipe I turned to Stonewall Kitchen’s Tart Cherry Preserves.

I used the Double Tap in two separate recipes and I wanted it to be really strong. The package of coffee would make a standard 12-cup pot of coffee. I put the entire package and 3 cups of boiling water in a French press and let it hang out for about 30 minutes. I pressed the coffee and let it cool.

Turn the grill to high and place a cast iron skillet on the grill to heat along with the grill. Score the fat side of the duck breasts diagonally, turn and repeat in the opposite direction, creating a diamond pattern. Season the duck breasts with salt & pepper. Place the duck breasts skin side down in the heated cast iron skillet. Sear until the skin is crispy and brown, approximately 9-11 minutes. Turn the breasts over and continue to cook another 3 minutes. Turn the grill off and allow the duck to cook until the internal temperature reaches 125°, for medium rare, approximately 15 minutes.

Remove the skillet from the grill onto a stovetop, then transfer the duck breasts onto a plate and cover with foil. Drain off all but 1 tablespoon of duck fat, reserving the rest for another use. Heat the skillet over medium heat and add the shallot. Once the shallot starts to brown, add the Lock-N-Load Double Tap and the stock. Increase the heat to medium-high and reduce by half, whisking constantly. Add the cherry preserves, port and marjoram. Mix the cornstarch with the water and add to the sauce. Whisk until the sauce thickens. Dot with the butter pieces and stir until the butter has completely melted. Thinly slice the duck breast and fan out on the plate. Spoon the cherry sauce over the duck.

Bring a large pot of salted water to a boil. Add the sweet potato slices and boil for 1-2 minutes until they are just starting to turn tender. Drain and put in an ice bath to stop the cooking process. Heat a large skillet over medium heat. Add 1 tablespoon of butter and the oil. When the butter melts, add the onions and white pepper. Cook until they begin to caramelize, stirring frequently, approximately 20-25 minutes. Add the brown sugar and continue to cook until the sugar is completely incorporated into the onions. Remove from the heat.

Drain the sweet potato slices and pat the potatoes with a kitchen towel to remove all the water. At this point, I switch over to a 10” cast iron skillet. Heat the skillet over medium heat and add the remaining butter. When the butter begins to sizzle, start layering the potato slices on top of the melted butter followed by a layer of the onions. Alternate the layers finishing with a layer of potatoes. Keep an eye on the bottom layer of potatoes. As soon as they start to brown, place the skillet into the oven (or on the grill and close the cover). Roast the potatoes until the top layer is golden brown, approximately 20-25 minutes. Allow the potatoes to cool for about 15 minutes. Turn the potato casserole onto a plate or cutting board. Cut the stacks with a biscuit cutter of desired size and serve.

In a small saucepan, melt the butter over medium heat and add the garlic. Sauté until the garlic becomes fragrant. Add the wine and lemon juice. Allow the sauce to reduce slightly and season with salt and pepper to taste. Spoon the sauce over the grilled asparagus.

Preheat the grill to medium-high.

Wash and trim the asparagus spears. If they seem overly thick, peel the bottom half with a peeler. In a shallow dish, drizzle a little olive oil over the asparagus and season with salt and pepper. Place the asparagus on the hot grill and cover. After about 3 minutes, check to see if the asparagus is developing grill marks. Once it does, turn the asparagus over. Remove from the grill as soon as there are grill marks on the second side. Place the asparagus on a serving dish and top with the Meyer Lemon Sauce.
37 Cooks members receive products from our sponsors to work with to create their posts; no other compensation is given. All content is solely the opinions of our members. Members also write non-sponsored posts that do not feature any products. These are not compensated in any way..