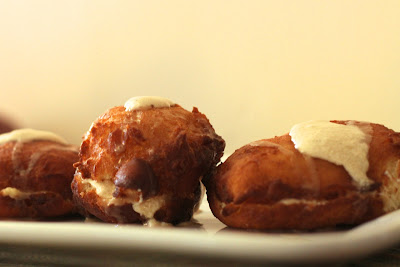 Is there a more classic combination than coffee and doughnuts? Maybe some people love to dunk their doughnuts into coffee, but I prefer the contrast of switching between sweet bites of doughnut and perfectly bitter sips of coffee. This treat, however, would win over the the most dedicated non-dipper. The doughnuts fry up beautifully. If they don't look perfect -- mine didn't, I have a hard time getting the pretty dough cutouts from the sheet pan to the hot oil -- don't despair. They should still have a crunchy outside yielding to tender airy insides, thanks to the yeast. The cream filling will have the fluffy texture of buttercream with the rich flavor of coffee. And a Charlie Don't Surf glaze adds a final punch of flavor. These may not be the prettiest treats I've ever made, but they are certainly amongst the most delicious. Start the dough the day before, then make the coffee cream and glaze while it rises. It's a little involved, but a simple process. And the taste is more than worthwhile! 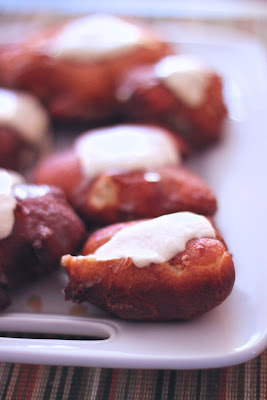 For the doughnuts:
I used this recipe from Brown Eyed Baker... and it is literally copied and pasted here.

Make the Dough:
In the bowl of an electric mixer fitted with the dough hook attachment, stir together yeast and milk; let stand until the yeast is dissolved, about 1 minute. Add the flour, sugar, salt and eggs; mix on low speed until the dough comes together, about 3 minutes. Add the butter, two pieces at a time, mixing after each addition and until the butter is fully incorporated and the dough is soft, a total of 5 to 6 minutes. Remove the dough from the bowl and wrap tightly with plastic wrap. Refrigerate for at least 6 hours and up to 15 hours.

Prepare the Doughnuts:
Line a baking sheet with parchment paper and spray lightly with non-stick cooking spray; set aside. Place the refrigerated dough on a well-floured work surface and gently roll into a 12-inch square (it should be about ½-inch thick). Cut the dough into 9doughnuts using a 3½-inch round cutter. Transfer the doughnuts to the prepared baking sheet, cover with a piece of plastic wrap that has been sprayed with non-stick cooking spray, and place in a warm spot until they've doubled in height and feel poufy and pillowy, 2 to 3 hours.

Fry the Doughnuts:
Fill a large, heavy-bottomed pot with 3 inches of oil and place over medium-high heat until it reaches 350 degrees F on a deep-fry thermometer. While the oil heats, line a baking sheet with a double layer of paper towels for draining the doughnuts. Place the sugar in a small bowl and set aside.

In a small bowl, cream the butter with an electric mixer until fluffy. Add the remaining ingredients and beat until completely incorporated. Adjust the texture to your liking: add more powdered sugar to stiffen things up, or a touch extra coffee if you prefer a looser cream.

In a small bowl, stir the sugar and coffee together until smooth.

(Alternatively, you could use a pastry bag with a metal tip to fill the doughnuts with the cream).
37 Cooks members receive products from our sponsors to work with to create their posts; no other compensation is given. All content is solely the opinions of our members. Members also write non-sponsored posts that do not feature any products. These are not compensated in any way..