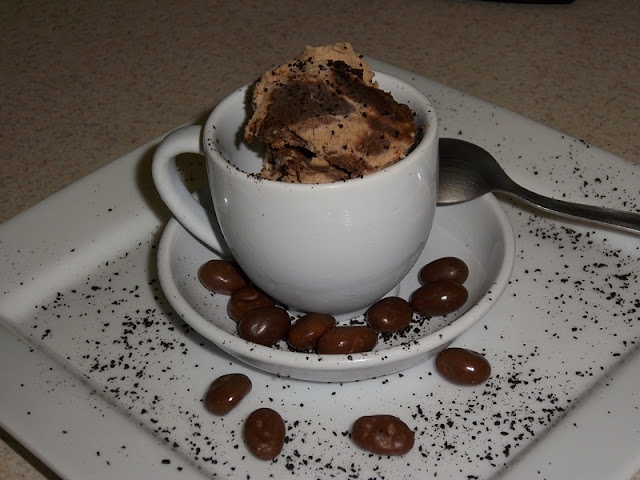 First, I'd like to thank the generous folks at Lock-n-Load Java for sending 37 Cooks all those wonderful samples of their awesome coffee! I was a little more excited about this challenge because I love anything coffee, and I'm kinda almost famous for my coffee known as Cake Daddy Coffee. There's quite a long story here, so grab a drink and a seat and read on.


As many of you know, I'm a butcher by trade and I love to cook. When my kids were little, I used to make all their birthday cakes, and as they got older, the cakes started to become bigger and fancier, and I ended up making wedding cakes for some of them. One of my daughters was planning an April wedding in Florida, and I was worried about the icing melting off the cake, as it's hot and humid in April in Florida. So I asked for some icing advice on Serious Eats, an online cooking site I frequented. My screen name is onepercent99, and I guess that name could be used either by a man or a woman, judging by one of the responses I got was from a friend, Jerzee. She thought I was the bride's mother, and she wanted to know how I was gonna make the cake, go to the beauty salon, get my hair and nails done, all on the wedding day! When I told her I was the father of the bride, we all had a good laugh, and from then on I was "Cake Daddy"!

I love experimenting with food and drinks, and I like to brew my coffee with a little cinnamon in it.One day, in an experimental mood, I added some cayenne pepper to the cinnamon laced coffee grinds.The end result was surprisingly good, and I shared it in one of our Facebook groups, Serious Eats Water Cooler. Another friend, christened it 'Cake Daddy Coffee', and it's almost world famous by now. When we got the coffee samples from Lock-n-Load Java, I knew one of my recipes would have to include Cake Daddy Coffee, and one of my first thoughts was coffee ice cream. Not the kind you get from the grocery store, with hardly any coffee flavor, but one that busts ya upside the head with coffee flavor, and Lock-n-Load Double Tap Special Reserve dark roast was the perfect coffee for my recipe. By the way, this was, by far, and let me say this again, by far, the best coffee ice cream I've ever had! 'Nuff said, here's the recipe!

Mix the cornstarch and 2 tablespoons milk together and set aside. Combine the remaining milk, cream, sugar, corn syrup, cayenne pepper and cinnamon in a heavy saucepan. Bring to a boil, stirring frequently, and boil for about 4 minutes.Take the pot off the heat, add the coffee grinds and let steep for 10 minutes. Strain through a layer or 2 of cheesecloth. A strainer will not work here, believe me, I tried...lol. Put the mixture back on the stove, add the cornstarch slurry and cook for 5 minutes over medium-high. I poured the mixture into a metal bowl to chill over an ice bath, then, once it has cooled down, into the fridge for a few hours. You want this base to be really cold when you start churning it. When it's thoroughly chilled, use whatever ice cream machine you have and churn according to the manufacturer's directions. When the ice cream is done, add the ganache, a teaspoon at a time, swirling it in by hand, as the ice cream machine will totally incorporate the ganache into the ice cream.

Heat the cream to almost boiling, add the chocolate, stirring until all the chocolate has melted. Add the butter,coffee and cayenne and mix until the butter is melted and everything is incorporated. Pour the ganache into a bowl and chill in an ice bath until ready to use, stirring every once in a while.

This is best eaten right after it's made!

Made in the USA, with love, by Matt the Butcher.
37 Cooks members receive products from our sponsors to work with to create their posts; no other compensation is given. All content is solely the opinions of our members. Members also write non-sponsored posts that do not feature any products. These are not compensated in any way..