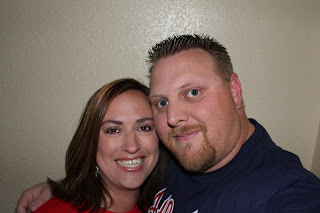 I am a born and raised, proud fourth generation Texan! My entire family resides in Texas to this day and I don’t see any of ‘em leavin’ anytime soon. I, however, live in Atlanta, GA, with my high school sweetheart and three children. We moved here eight years ago. It took my husband nearly three years to convince me to leave Texas. After many prayers and tears, I agreed and we packed up our family and moved to a little country suburb outside of the city. To this day, it has been the hardest thing I have ever done, and I gave birth to three children naturally! It was that painful. To explain to you who I am, besides a Texan, I have to back up just a tad…

I met my husband when I was 14. Our relationship started because of a mouse and food. I wanted a job. Being that I was only 14, I lied about my age to get my first job at Chuck E. Cheese. I was a cashier. There was this blonde haired, blue eyed, sarcastic kid, who I thought was a punk. He worked in the kitchen as a cook and, on occasion, as Chuck E. I had worked at C.E.C. for just under two weeks when I had to work a double and was STARVING. I had never spoken to this punk (aka Adam), but decided I was hungry enough to talk to him and I asked him to make me an Italian Sub. He just stared at me and nodded his head. As I walked away I just figured he was a weird-o, but at least I was gonna eat. As we were closing, I received a small note from Adam that read, “I will make you a sub if you go on a date with me and some friends tonight.”

Now, my daddy did not allow me to go on “dates”. And besides, I didn’t even want to go on a date with him, so I said no. A mutual friend of ours knew that he had just written me this note and, long story short, talked me into going on one date. He promised me he would be there with his girlfriend, who was also a friend of mine. I was getting desperate. The lining of my stomach was burning. I would have eaten a sandwich off the floor! So, I agreed and lied to my dad (Wow. There’s a theme here that I never thought of before. Sorry dad!). I told my daddy we had to deep clean the restaurant and would be done around 1 a.m. That gave us about 3 hours for the date. I figured I could survive 3 hours, plus I was getting food out of this whole thing! So, we went on our date. He was sarcastic, but I couldn’t deny how hot he was! The date came to an end and he tried to kiss me but ya, I wasn’t havin’ any of that! I got my sub. He got his date. That was it. But, God had a different ending. The next day came and he told me he was going to marry me, wrote a poem (I still have it along with the original note) and he made me this origami flower (yup, have this too). As hard as I was trying to, I just couldn’t resist him. So, we started talking and I let him take me on a few more dates.

A few years later our relationship was really tested. We got pregnant at 16. I won’t get into all the details, but when I broke the news to Adam that I was pregnant, he didn’t think twice about what to do. We got our plan together. He worked his butt off to graduate high school and put himself through college, while I stayed home to care for our son. Four years later, we had our second son and decided we would not send our children to traditional school, but we would homeschool them instead. Another six years later we prayed God would give us a little girl. She is now four. We are in our 13th year of homeschooling and just graduated that son we were so terrified to have. Life with Adam has been exciting to say the least. He is my best friend and makes me laugh every day. He is still so darn sarcastic, but I have learned to love it. He’s the funniest person I know. We now own our own business producing low sodium sea salts to some of the world’s top food manufactures. That in itself keeps us on our toes.

We both love to cook. We both grew up fast and had to learn how to cook pretty much on our own. Adam is a better cook than I am and I’m ok with that. Who doesn’t love a man who can cook?

My goal as a mother is to provide healthy, delicious meals for my kids. I love having them in the kitchen with me. My daughter is my sous chef. She cooks with me about 90% of the time. She has her own aprons and chef hat. She’s totally adorable! My favorite food is Mexican. I was raised on real, authentic Mexican food. My grandfather never served a meal without homemade tortillas and never ended a meal without sopapillas! However, my love for Mexican food has nothing to do with my signature dish. I try to cook healthy as much as possible, but the dish I’m sharing with you is so NOT healthy! But, it is kid friendly. I only make this twice a year… Thanksgiving and Christmas. My kids would love to eat this every week. Heck, I would love to eat this every week.

Cheesy Bacon Macaroni. Those three words just SOUND delicious. This recipe started out basic and has evolved into the best macaroni and cheese I have ever tasted. I literally could just eat it right out of the bowl with a ladle forgetting about any manners. Sharing? Pft! Not hardly! Make your own! 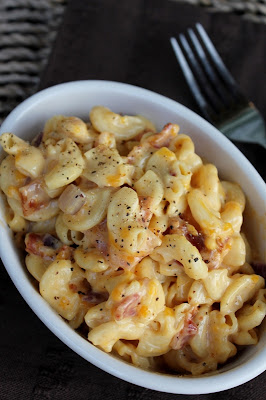 Start a pot of water to boil. Salt the water. Go ahead and cut up your mozzarella and Velveeta into small 1-inch cubes and shred your other block of cheese. You do not have to use the entire block of sharp cheese. This is up to you on how cheesy you like your mac. I do use the entire block, though. While waiting on water to boil, cut up your bacon into bite size pieces and dice your red onion. I find a pair of sharp scissors is best for cutting the bacon up into even sizes.

Now, this is a crucial step. You MUST cook the bacon and onion together. If you cook them separately, the macaroni just doesn’t have that perfect taste. Trust me on this, I’ve tried it. Cook these items together until your bacon is cooked thoroughly, but not too crispy. A chewy bacon piece is much better than a hard crunch in this mac.

Add your macaroni to the boiling water. Boil for about 6 minutes, or until al dente. Drain your macaroni, dump it into a large bowl and immediately add the hot bacon/onion mixture. Yes, with the bacon grease and all. I already warned you this is not healthy. It’s also why I only make it twice a year.

Slowly alternate adding pieces of cubed mozzarella and Velveeta with pouring in the evaporated milk, until all the cheese and milk is stirred in. Then add your shredded cheese, a little at a time, so you don’t clump the cheese. Add more evaporated milk as needed. You won’t use the entire second can. I typically use about half of the second can. Add in your dry mustard. Salt and pepper as you like. About this time, your hand is killing you, but you’re done. So, spoon up a heaping bowl full and gobble it up! Enjoy!
37 Cooks members receive products from our sponsors to work with to create their posts; no other compensation is given. All content is solely the opinions of our members. Members also write non-sponsored posts that do not feature any products. These are not compensated in any way..