What is "Smoke Point"? 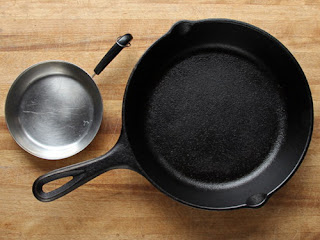 Many of our cooks had a lot of questions about proper cooking temperatures when using the Sciabica oils. The oils are so fantastic; you don't want to waste a single drop on a cooking temperature mistake! We asked our veteran baker, cook, food blogger and all around outstanding 37 Cooks member, Donna, to investigate. Bookmark this article! You'll want to refer back to it in the future. ~37 Cooks


When you're about to throw some food into a frying pan, you probably want a little oil in the pan, too.  But what's the right oil to use?

Cost is a factor, too.  If you're deep-frying a turkey, you probably don't want to use an artisanal oil that's sold in cut-glass 4-ounce bottles.  You want something that's sold by the gallon at a reasonable price.

And then there's the smoke point.  Which is important, but somewhat mysterious, too.

Okay, maybe not that dramatic if you flame the tablespoon of oil in your frying pan, but still not a pleasant event.  Flaming alcohol is good.  Burning oil is not.  Besides being a fire hazard, the flavor of the oil will change when it begins to burn and smoke, and generally not in a pleasant way.  At best, you lose the subtle nuances of a great oil.  At worst, it tastes really, really terrible.

If heating your oil to the smoke point is a bad thing, you might wonder why some recipes suggest heating your oil until you see the first wisp of smoke and then adding the food.  Seems wrong, right?  But in those cases, adding the food lowers the temperature of the pan (and the oil) quickly, so you're immediately below the smoke point.  And your steak is nicely seared.

The confusing thing about smoke point is that for every type of oil, there's a range of smoke points, depending on how refined the oil is, how old the oil is (as oil breaks down over time, its smoke point get lower), and what brand of oil you're using.

The more impurities in an oil, the lower the smoke point.  That's because it's the non-oil particles in the oil that are going to burn first.  That's why butter, with all its lovely milkfat solids,  has a much lower smoke point than ghee, which has had all those solids removed.

Impurities in oil are not necessarily a bad thing.  The minuscule bits of olive particles in an olive oil can give that oil a lot of flavor.  In fact, there are plenty of unfiltered olive oils that have a lot of those bits remaining.  And there are flavored oils as well, with citrus, pepper or herb flavors infused into the oils.  But are they good for cooking?  Maybe...or not.

Some oils have a smoke point printed on the label, and if that's the case, that's the number you can assume to be correct.  The manufacturer knows how filtered or refined the oil is, and probably has tested the oil to determine its smoke point.  Other oils are labeled "high-heat" oil, and you can assume they're also going to perform well at higher temperatures.

But what about unlabeled oils?

Any highly-flavored oil is probably not intended for cooking, or at least not in great quantities or at high heat.  Unfiltered or unrefined oils are also best used as finishing oils, or for very gentle cooking.  So you know what not to use to fry your fries.  But what oils are good for searing that steak?

After looking at bottles and checking online sources, I found a pretty wide range of smoke points for all of the common cooking oils.

Some of these oils are easily available in every version from unfiltered to very refined (like olive oil) while others are more likely to be refined (like canola or peanut oil).  To be honest, I don't think I've ever seen a non-refined version of canola oil, and I've only seen one type of unrefined peanut oil, and I'm pretty sure no one would have mistaken that for a high-heat cooking oil.

But somewhere, unrefined oils of every variety probably exist.  So check labels for clues, and then you can figure out what the smoke point should be.

When you're cooking in a pan, how hot is that pan?

If you're deep-frying, you should be using a thermometer to monitor the temperature of the oil.  But you can't measure the heat in a frying pan the same way.  So how hot is a "hot" pan?

If you look at an electric frying pan or similar device, the temperatures probably look something like this:

Then, when you add room-temperature pasta to a pot of boiling water, that water stops boiling, since the cooler food has lowered the temperature of the water even more.

That same sort of thing happens in a frying pan, as well.

While you're not going to be boiling water in an oiled pan, your food has water in it, and since that water has an upper temperature limit, that will keep the heat in the pan down, at least where the food meets the pan.  Of course, the solid matter in the food, as well as the fat, can reach a higher temperature, but those water molecules are never very far away.

And since the food you add to the pan is at a much lower temperature to begin with, that pan cools pretty quickly when the food goes in, just like the pasta water that stopped boiling when the noodles took a dive.

The actual cooking temperature of foods with a high water content, like that big pan of vegetables you're cooking, is likely to be under 300 degrees.  Most foods are going to be below 375 degrees under normal cooking conditions.  Of course, that depends on the type of pan you're using, how long you heat it, and what sort of food you're cooking.  A cast iron pan on high heat for an hour might be glowing red and ready to incinerate anything it comes in contact with, but that's not how most people preheat a pan.

But most foods don't need super-high heat anyway.  You want a really hot pan for searing a steak because you want that crusty exterior.  But you probably don't want that same effect on your onions and garlic.  Or your pancakes.

Taking its temperature - without a thermometer.

If you don't have an infrared thermometer to check the temperature of your hot pan, there are other ways to tell how hot a pan is.  Below 212 degrees, a drop of water tossed into a pan will flatten out and evaporate slowly.  Above 212 degrees, the water will hiss and evaporate quickly.  When the temperature reaches about 375 degrees, droplets of water will dance across the surface of the pan, and that's what many recipes would call a "hot" pan.

Some recipes also suggest looking at the oil in a pan, waiting until it "ripples" in the pan, or waiting for those first telltale wisps of smoke.  Which, of course, tells you more about the oil that has reached its limit, than about the actual heat of the pan.

Which leads us to the question of when to add oil to a pan.  You might have heard the phrase, "hot pan, cold oil; food won't stick" popularized by The Frugal Gourmet.  But is it valid?

Harold McGee agrees that the pan should be heated before the oil is added, but he's not as concerned about the sticking.  Instead, he says that adding the oil later means that it won't have as much time to break down as it heats up in the pan, so this is better for the oil.  Which is better for the flavor of the food.

Others go a step further and say that they don't put oil in the pan at all, but coat their food with the oil instead.  This gives the oil even less time to oxidize or burn.  This method makes a lot of sense for grilling or when you're used a ridged grill pan.

Cook's Illustrated, on the other hand, allegedly insists on NEVER heating a pan unless it has oil in it.  I couldn't find the original statement from them, but I found plenty of references to the admonition, and I heard the same thing from a Cook's Illustrated alum.

I'm not sure why they take this stand, but I suspect it's has to do with potential damage to the pan.  It makes sense with nonstick or coated pans since you don't want to damage the coating or have it give off fumes.  But I'm not sure what the problem would be with heating an empty cast iron pan, which is pretty much essential when making or heating tortillas, since they're cooked without any oil at all.  And spices are often toasted in a dry pan as well.

Most cooking, though, is done with some fat in the pan, whether it's a cooking oil, butter, or duck fat.  And pretty much any fat can be used in cooking, as long as you don't raise the heat too high.

I gleaned the following smoke point temperatures from a number of sources.  The temperature ranges for some of the oils are due to different opinions on the smoke point.  Others, like olive oil, are due to the fact that there are a wide range oils available.

When it comes to olive oil, the unrefined olive oil should probably be saved for use in cold preparations while extra virgin olive oil can take some heat and extra light olive oil can be used for high-temperature cooking.

There are a number of other oils that can be used for cooking - even at high heat - like avocado oil which has a smoke point in excess of 500 degrees for the refined version.  But it's a relatively expensive oil that most people would use for its flavor rather than its cooking properties.

To me, the interesting thing is that most oils - if you choose the refined versions - can be used in a pan that has passed the "dancing water droplet" test at 375 degrees.  But just because you can cook with an oil, it doesn't mean that you should - some oils really are all about the flavor.
37 Cooks members receive products from our sponsors to work with to create their posts; no other compensation is given. All content is solely the opinions of our members. Members also write non-sponsored posts that do not feature any products. These are not compensated in any way..