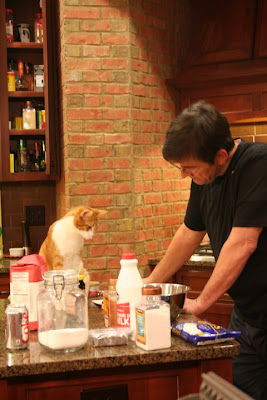 I grew up in Houston, Texas, in an area that was confused as to its identity. We weren't really the Heights, which was more affluent, but we couldn't claim to be the 1st Ward because it was farther south, even though economically, we were a closer match. As a result, I grew up with a very ethnically-mixed group of friends and was exposed to a variety of foods at an early age.

My mom grew up on a South Texas farm, where everything could be made to taste better with bacon, butter, or gravy. My best friend’s mom (my second mom) came from Peru, so I was exposed to dishes composed of organ meats and a variety of vegetables and rice. The area was really known as the Near Northside and was predominantly Mexican. As a result, I had
many friends whose mothers cooked unbelievably great food from the homeland, and to this day, real Mexican is my favorite cuisine.

While playing softball and baseball, I made many black friends. Some ate traditional southern soul food, but the ones that had the most influence on my culinary preferences were from Louisiana. Between the spice from my childhood friends' Mexican food and these friends' Creole and Cajun dishes, I have developed a love for all things HOT!!!

After the fall of South Vietnam, many Vietnamese families moved to the Houston area because of the Gulf Coast, and so I developed a love for their cuisine. The idea of mixing fresh vegetables and herbs after the main dish is cooked stays with me today.

I have traveled extensively in my career and my exposure to various cuisines has taught me a valuable lesson, I’ll try anything once, twice if I like it. As a result, I look for new experiences in my travels. One of my recent discoveries is the amazing Ethiopian cuisine.

My absolute favorite foods are bacon cheeseburgers, chicken fried steak, chili, and smoked Texas brisket. Hey! I’m a Texan! I often cook these at home and choose any of the four for guests that I really like. If I had to choose my favorite meal that I cook it would be chicken fried steak, mashed potatoes smothered in cream gravy and green beans with an insane amount of bacon.

Food is an incredible way to communicate your love for each other and great food eliminates all boundaries. Laissez les bon temps rouler---let the good times roll! 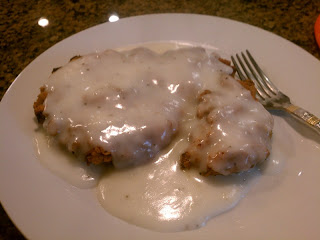 Place the buttermilk in a shallow dish.

Place the flour in a shallow dish and mix in the Slap Ya Mama or another seasoning salt (but why would you use anything else?).

Butterfly the strip steaks and pound them thin. Soak the steaks in the buttermilk for 30 minutes.

Pour oil into a cast iron skillet to about ½ “ and heat to 325F. Place the steak in the hot oil and fry until golden brown on both sides. Repeat with the remaining steaks.

Smother with cream pepper gravy and Remember The Alamo and Goliad!

I would give you a recipe for the gravy, but Pioneer Brand  Peppered Gravy Mix is perfect, so why bother?
37 Cooks members receive products from our sponsors to work with to create their posts; no other compensation is given. All content is solely the opinions of our members. Members also write non-sponsored posts that do not feature any products. These are not compensated in any way..