I live in Columbus, Ohio with my loving husband Tim, and our very smiley baby boy, James. Growing up, I learned the importance of home cooking from my mom and grandma. I started cooking simple things for myself after college and vastly widened my horizons when I was a Peace Corps
volunteer in Benin, West Africa. I work in the technical side of the production industry and do freelance audio work on the side. I truly believe that being a part of 37 Cooks has made me a better cook.

Instead of a signature dish, I decided to go with my signature cooking style. I guess it’s a “use what ya got” kind of approach. I hate when food goes to waste and love the challenge of making meals out of nothing.

I have a leftover ham bone in my fridge that has been staring at me for several days. What can I do with a ham bone? Let me guess; bean soup. Or maybe some bean soup. Oh, I know! I could make bean soup!! Now, don’t get me wrong. I love a good bean soup as much as the next guy. And bean soup that’s been made with a ham bone is nothing short of magical. But sometimes, just sometimes, don’t you want to be a Maverick of Leftovers? A Rebel of Frugality! A Rogue Ham Bone Cooker!!!

Of course you do. And this post is for you.

Now, when dealing with a ham bone, there are two main sources from which to get hammy goodness. First is the ham itself. Second is the bone. We’ll start with the ham.

There are always bits and chunks of ham left over from the slicing process, and probably a lot more meat left on the bone than you realize. Keep the bits and chunks, cut off as much meat as you can, and after the bone has simmered away, scavenge what is left again. You will have cooked away much of the flavor at that point (it’s all in the broth!), so try to get all the big chunks off first. From here, there are countless things to do with the ham chunks. Some of them are obvious, but maybe there will be a few things here that hadn't occurred to you. (I’m leaving out the bean soup on principle.)

Now we’ll move on to the bone. Put it in a big pot. Add a few carrots, an onion, a few stalks of celery, and some garlic. Cover with water and bring to a boil. Reduce to a simmer. Cook for about 3-4 hours. After 3-4 hours, strain the stock and discard all the vegetables; they have done their work. Let the stock cool and stick it in the fridge. It’s easier to de-fat once it’s cold. TIP: Resist the impulse to add salt at the beginning. Let the ingredients do their thing for a while. Besides, ham is pretty salty on its own. I don’t like to add a lot of salt, even at the end. I prefer to tailor the saltiness of the stock to whatever I’m making. 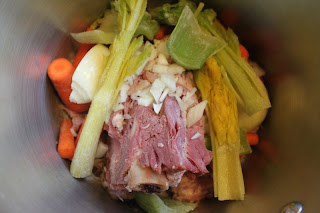 I chose to make asparagus risotto because I had been craving asparagus. I also had about one cup of Arborio rice in the cupboard that I wanted to use up. Use what ya got! I love this dish and will definitely make it again. The key to risotto is keeping the stock warm. If you add cold stock to hot rice, you immediately stop the cooking process until the rice heats up again. Warm stock is the way to go. 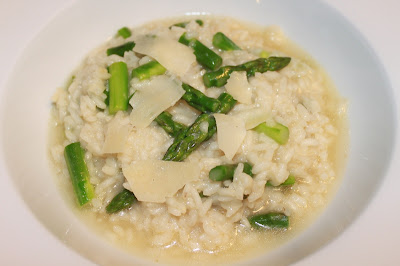 1. Melt the butter in a medium-sized saucepan over low heat.

2. Add the onion and cook until slightly soft.

3. Add the garlic and cook for a few more minutes. Do not burn!

4. Add the rice, stir to coat, and cook for another 2 minutes.

5. Add the white wine or vermouth and stir to loosen any bits on the bottom of the pan.

6. Add the ham stock, ½ cup at a time. Stir the rice frequently, but it’s not necessary to stir constantly. You should be at a low simmer.

7. Add the next ½ cup when the liquid has almost completely absorbed.

8. Continue adding stock until the rice is tender. You may not need all 4 cups of the stock.

9. Stir in the egg yolk. The residual heat of the rice will cook the egg.

10. Stir in the grated Parmesan.

11.Gentle stir in the asparagus.

12. If necessary, add another half a cup of liquid to keep the risotto loose and brothy.

13. Ladle into bowls and top with a few shavings of Parmesan.
37 Cooks members receive products from our sponsors to work with to create their posts; no other compensation is given. All content is solely the opinions of our members. Members also write non-sponsored posts that do not feature any products. These are not compensated in any way..