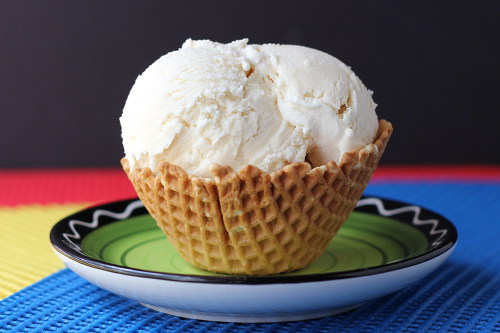 I wanted to make toasted marshmallow ice cream, but what I ended up with was a really nice vanilla ice cream with just a little bit of a toasty flavor. But that's really okay. Vanilla goes with everything, and I like a good vanilla ice cream as much as any other flavor.

I still have more marshmallows, and lots of other ideas. I'm not done yet.


Even though this wasn't what I planned on, I still like the ice cream a lot. The subtle toasty flavor was nice, and the texture was really good. And it's a nice use for leftover marshmallows.

You don't need to weigh the marshmallows exactly - it's fine to eyeball half of a bag.

Place the marshmallows on a baking sheet and toast them under your broiler until they're nicely browned but not burned. Turn them to get them toasted on as many sides as possible.

Put the marshmallows and the milk in your blender and blend until smooth. Add the cream, salt, and vanilla extract and blend just long enough to combine.

Transfer to a container and refrigerate until thoroughly chilled - at least an hour or two, or overnight.

When the mixture is chilled, churn in your ice cream maker according to manufacturer's directions. Transfer to a storage container and freeze until firm.

Aren't those waffle cups cute? They're made by Keebler. No, I didn't get 'em for free. I bought them.
37 Cooks members receive products from our sponsors to work with to create their posts; no other compensation is given. All content is solely the opinions of our members. Members also write non-sponsored posts that do not feature any products. These are not compensated in any way..