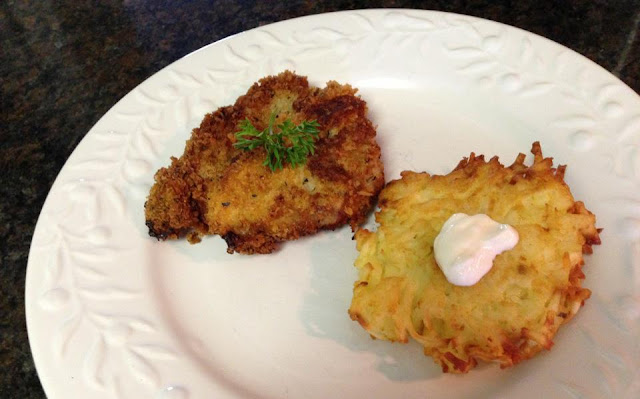 Directions:
1. Pound the meat until it is less than 1/4 inch thick.
2. Into a large skillet, pour oil approximately 1/4-inch deep; heat until the oil bubbles when you drop in a pinch of breadcrumbs.
3 Beat the egg, add 1 teaspoon of lemon juice.
4. Add the parsley to breadcrumbs.
5. Dredge the meat in the egg, then the breadcrumb mixture; fry until golden brown on each side.
6. Sprinkle with the remaining lemon juice.

Latkes
by Rachael Tanis
adapted from Potato Latkes I

Directions:
1. In a medium bowl, stir the thawed potatoes, onion, eggs, flour and salt together.
2. In a large heavy-bottomed skillet, over medium-high heat, heat the oil until hot. Place large spoonfuls of the potato mixture into the hot oil, pressing down on them to form 1/4 to 1/2 inch thick patties. Brown on one side, turn and brown on the other. Let drain on paper towels. Serve hot, with optional dollop of sour cream.
37 Cooks members receive products from our sponsors to work with to create their posts; no other compensation is given. All content is solely the opinions of our members. Members also write non-sponsored posts that do not feature any products. These are not compensated in any way..