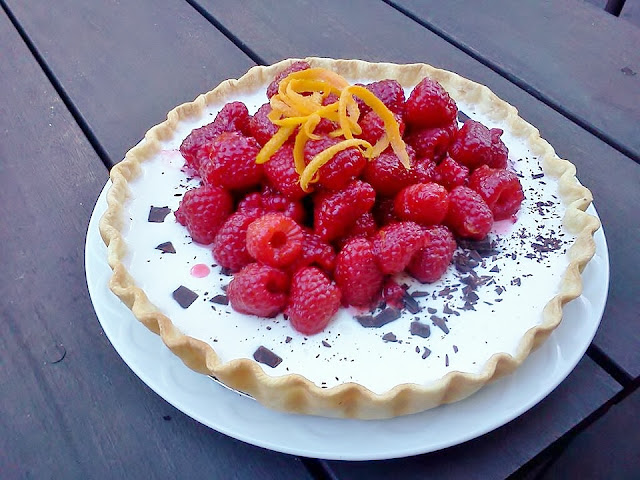 A few weeks ago, I saw a recipe for Blackberry Buttermilk Pie over on Serious Eats. It sounded so light and refreshing, and just screamed summer. I wanted to play around with it and thought, “Ooh, how’s about a Cherry Garcia Buttermilk Pie, with a bit of chocolate chunks in the filling and cherries on top?”

Well, Wegmans was out of cherries. That should have been my first clue as to how my plans were going to go. But I’m one of those cooks who can wing it and improvise. The raspberries looked wonderful, so I grabbed a pint of them.

I really love a cream cheese pastry crust and had one in the fridge, ready to go. Problem #2 arose when I burned it while blind baking it. I’m blaming it on Sandra. We were chatting online about, of course, 37 Cooks. And well, honestly I had two batches of bread dough going too, so…

I did the Pillsbury Punt and used a refrigerated instant crust and THIS time used a timer. Duh. I blind baked the crust that evening and made the filling the next morning, topped it with the berries while home for lunch and brought it into work. Pouf! It was gone in three minutes flat. Faster than the Garlic Cheddar Chive bread I brought in the morning, which is saying something, because my co-workers love my breads.

Adjust oven rack to lower middle position and preheat oven to 425°F. When oven is ready, line chilled pie shell with foil or parchment paper and fill with weights (I reuse dried beans for this), and bake on the lowest rack of the oven for 15 minutes. Remove weights and liner, turn pie, and bake until the bottom crust is a golden brown, about 10 minutes. Remove pie shell from oven and allow to cool completely.

Place 1/4 cup cold water in a small bowl and sprinkle with gelatin. Allow to sit until softened, about 2 minutes. Add heavy cream, salt, and 1/4 cup sugar minus two tablespoons and 2 tablespoon of honey to a medium saucepan set over low heat, stir to combine and slowly bring the mixture to just a simmer. Once it starts to bubble on the edges, remove it from the heat and stir in the gelatin until it is completely dissolved. Stir in the buttermilk and vanilla. Pour the mixture through a fine mesh strainer into the pie shell and chill. About 30 minutes into chilling, add chopped chocolate to filling and continue chilling for at least 4 hours, until the filling has set.

When ready to serve:
In a medium bowl combine berries, remaining sugar, remaining honey, juice and zest. Toss to combine and allow to sit for ten minutes, until the berries begin to become juicy and the sugar has dissolved. Top the set pie with the berries and serve.
37 Cooks members receive products from our sponsors to work with to create their posts; no other compensation is given. All content is solely the opinions of our members. Members also write non-sponsored posts that do not feature any products. These are not compensated in any way..