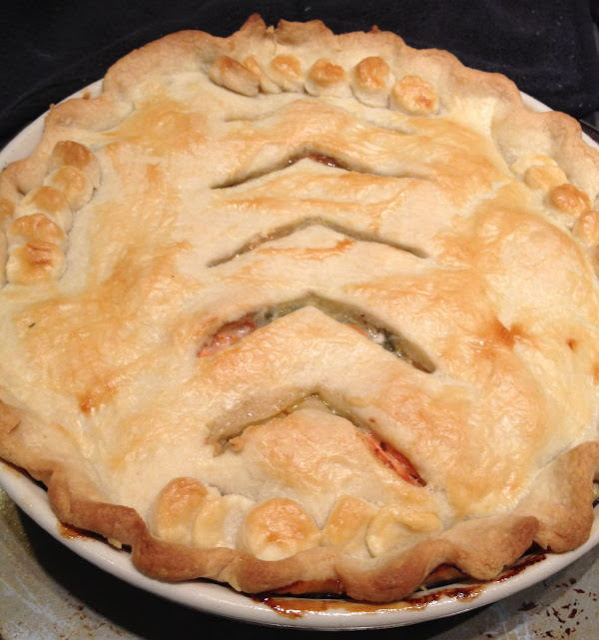 Yesterday,  I mentioned that our first member of Friends of 37 Cooks, Maurita Plouff, would have another featured recipe today. Here it is!  Check out Maurita's blog called Get the Good Stuff.
Have a great weekend, 37 Cooks

Don't be intimidated by this! It's going to look like a long recipe, because I'm going to describe everything in detail. But there are only three simple components: the salmon filling, a sorrel sauce, and the pastry top. I made the pie dough for the crust, but you can certainly use refrigerated pre-made crust, or even frozen puff pastry.
If you start with leftover salmon and use pre-made pastry, this pie will go together in less than 5 minutes. It's not all that difficult making everything from scratch. Try it and see!
Part 1: prep the pastry
I used a simple 3-2-1 pâte brisée recipe, which I'll give here. Remember you can use refrigerated or frozen pastry for simplicity's sake.
Mix the flour and salt - I use a food processor, so stick them in and pulse it once or twice. Add the chunks of cold butter, pulse again 6-8 times, until the mixture looks like coarse meal, with some pieces of butter up to pea-sized. Add ice water 1 Tbsp at a time, pulsing until the mixture just begins to clump together.
Remove mixture, mound it on a clean surface. Gently shape the mixture into a disk, wrap it loosely, and refrigerate it until you're ready to roll it out.
Part 2: the salmon filling
If you have any leftover salmon, this is a perfect place to use it. I didn't.
First, cook the salmon. Preheat the oven to 425˚ or so. Put the branches of fresh dill on the bottom of a baking dish, and place the salmon, skin side down, on top. Pour white wine around the salmon. Cover the dish with foil, and bake about 10 minutes. Remove from oven, uncover, and set aside. The fish will be almost cooked through.
While the salmon is cooking, melt the butter in a skillet. Add the sliced onion, stir it to coat it, and cook over medium-low heat, until golden and beginning to caramelize.
Take a pottery or Pyrex pie dish, and grease it lightly. Take the cooked salmon, cut it into rough chunks, and add it to the cooked onions in the skillet. Mix gently, and transfer the salmon/onion mixture to the pie dish.
Reduce the oven temperature to 400˚ while you make up the sauce.
Part 3: the sorrel sauce
Stack the sorrel leaves, roll them up side-to-side like a cigar, then slice crosswise into thin pieces (a chiffonade). In the same skillet you used for the onions, without bothering to wipe it out, melt the butter. Add the sorrel leaves, and let them cook a bit. Stir them often; they'll melt into a sludgy green mass. When the leaves are wilted, add the wine. I used the liquid that was left in the fish-baking dish, and I'd suggest you do that, too. Cook it down a bit, and when the liquid is reduced by half, add heavy cream. Cook that down a bit, too, and when you're pleased with the texture, add it to the fish and onions in the pie dish. Combine gently, to distribute the sauce evenly.
Part 4 at last: Finishing the pie!
Now it's time to put the crust on top and bake that pie. If you made your own crust, roll it out on a lightly floured board. Transfer the crust - no matter whether it's homemade or packaged - to the top of the filling in the pie dish, leaving a 3/4 inch overhang. Fold any excess under all around, then flute the edges. Score the top of the pie with at least 2-inch long cuts, so that the steam from the cooking pie filling can escape. Make the cuts pretty any way you like them, I used chevrons in this pie.
If you have any leftover bits of pastry, you can shape them decoratively and stick them on top of the pie in some pleasing pattern.
Brush the top of the pie with the egg to make a glossy crust.
Put the pie on a baking sheet, in case of any spillover. Bake the pie at 400˚ for 25-30 minutes, until the pastry is golden and the filling is bubbling. Let cool for at least 5 minutes before serving.
37 Cooks members receive products from our sponsors to work with to create their posts; no other compensation is given. All content is solely the opinions of our members. Members also write non-sponsored posts that do not feature any products. These are not compensated in any way..