Slap ya Mama Duck Gumbo with Andouille Sausage and Shrimp 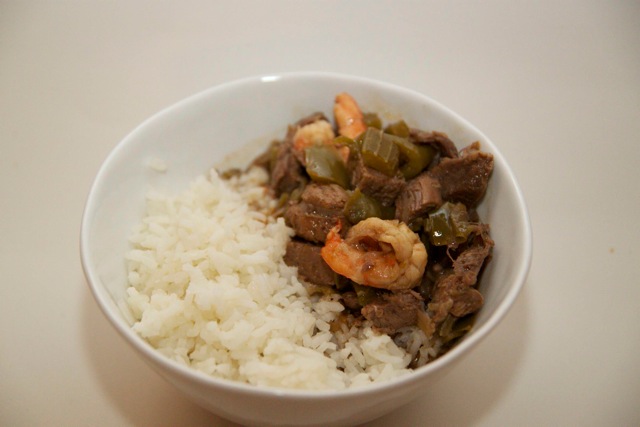 Using kitchen shears or a sharp knife, carve the duck into serving pieces: two wings, two leg quarters, two breasts. Trim off as much of the fat as you can. Reserve the spine and rib cage. Then, using a sharp knife, score the skin of the duck breasts.

Next, make stock. Place the duck wings and body into a stock pot. Just barely cover with water. Allow to come to the barest simmer, skimming off any scum that rises to the surface.

While the stock is cooking, in a Dutch oven on low-medium heat, render the excess fat that you removed from the duck. When the pieces do not give off any more fat, remove them. Turn up the heat to medium. Season the duck pieces with Slap Yo Mama, then brown the legs and breasts until golden. Remove the pieces from the Dutch oven and reserve on a plate.

Now we're going to make a roux. You should have about a half-cup of golden liquid duck fat remaining in the Dutch oven. Add a half-cup of flour to this and stir constantly until the roux is dark brown. All of the Cajun cookbooks advise letting it go until it's mahogany-colored, almost black. See how brave you can be. This will take at least thirty minutes.

When the roux is as dark as you can stand for fear it will burn, add the vegetables (green pepper, okra, celery, onion, garlic). Stir occasionally until vegetables have softened a little. In the meantime, remove the duck pieces from the stock and skim or strain until clear.

When the vegetables have softened, add about six cups of stock to the pot. Add the thyme (tied together with twine if using fresh), 6 tsp Slap Yo Mama, bay leaves, and salt. Then add sausage slices. Stir everything really well to make sure that all the roux has been absorbed into the stock. Then raise the heat to medium-high. Let everything come to a boil, then bring back down to a simmer.

Add the remaining duck pieces and allow to simmer uncovered for at least two hours.

Remove the duck pieces from the gumbo and, as soon as they are cool enough to handle, remove the skin and debone. Slice the meat into rough chunks, then add back to the pot along with the shrimp. Let simmer for another 5-10 minutes, until the shrimp are cooked through. Salt to taste. 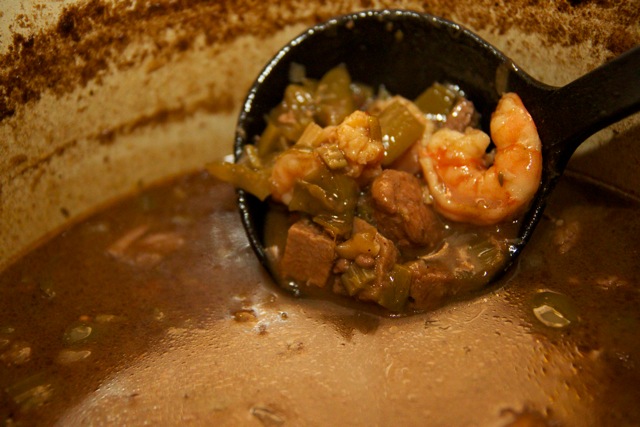