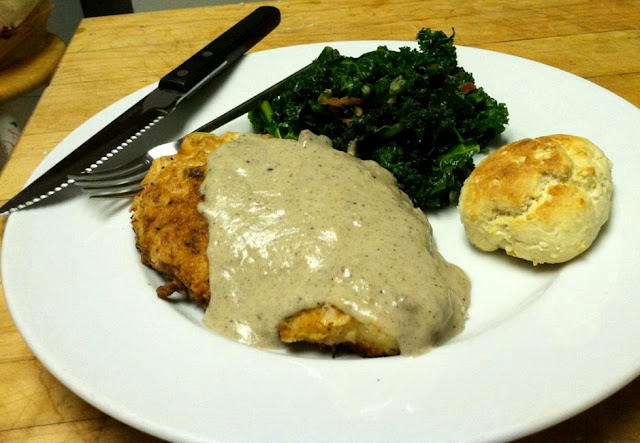 Lay chicken breasts, one at a time, on a cutting board. With a very sharp knife, slice each breast in half horizontally. Now you have 6. Whisk a little more than 3 tsp SYM seasoning into the buttermilk. (Of course you can add more, but this gave it a nice kick w/out being overpowering). Add all of the chicken pieces to the buttermilk mixture and let soak for 30 minutes. Heat large cast iron skillet and add bacon fat and vegetable oil. Enough to come 1/2 way up the chicken pieces. Coat each piece of chicken in the seasoned flour and add to the hot oil. Fry until golden brown on both sides. Remove and keep warm in a low oven.
Pour off all of the oil except for 1 T. Add an additional T bacon fat. Stir in enough flour to make a roux. Slowly whisk in milk to make a smooth gravy. Season with S&P, to taste.

Slap Ya Mama Kale with Bacon

Fry bacon in large skillet until crispy. Remove, drain and break into little pieces. Leave about 1 T of grease in skillet and kale to hot fat. Toss to coat and cook until slightly wilted. Add SYM and bacon and toss again. Done!