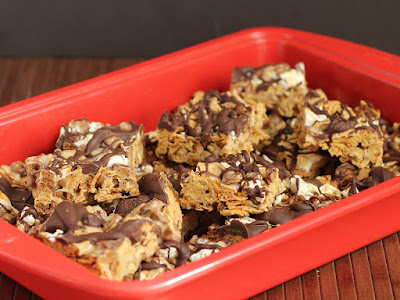 Cereal is fun to cook with. The funny thing is that I'm not a huge fan of a cereal-and-milk breakfast, but I can find all sorts of ways to use cereal in recipes.

This time, I decided to combine Chocolate Cheerios and Golden Grahams to create something with the flavor of s'mores.

The cereals I received from General Mills are made with natural colors and flavors, which is a good thing, right? But the important thing to me is flavor, and I thought they would work perfectly to make bars that wouldn't be overly sweet.

Then I started thinking about the toasted flavor you get from heating a regular s'mores over a fire.

The answer was simple. I added more marshmallows to the top of the bars and hit them with my culinary torch. Just like when you're toasted them over the fire, some of them toasted golden brown, and then there were a few that got a bit blackened. Perfect!

To guild the lily a little more, I melted some chocolate and drizzled it on top of the bars. Because more chocolate is always okay.

While these are certainly sweet, they're not crazy sweet. Which makes me happy 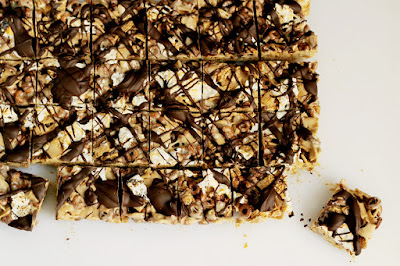 Spray a 9x13 pan with cooking spray or butter it.

In a heavy-bottomed saucepan, melt the butter and peanut butter on medium heat. Add the salt, then add the marshmallows, and cook, stirring, just until the marshmallow melt.

Add the cereals and stir to coat all the cereal with the marshmallows.

Turn the mixture out into the prepared baking pan. Wet your hands with cool water and press the mixture down evenly into a pan. Re-wet your hands as needed to keep the marshmallow from sticking. You could also use a spatula, but hands are easier.

Cut one or two large marshmallows into small pieces. Or, if you have mini marshmallows, cut them in half. Arrange the marshmallow bits randomly on top of the bars.

Use a torch to soften the marshmallows, then use a spatula to spread and affix them to the top of the bars. If you have gaps in the bars, you can tuck marshmallow in there. Use the torch again to toast the marshmallows.

Melt the chocolate chips in a microwave-safe measuring cup, heating in 30-second increments and stirring in between heating, until the chocolate is melted and easily pourable.

Drizzle the chocolate over the bars in a random pattern.

Let the bars cool completely (and make sure the chocolate has hardened again) before removing from the pan. Cut into bars.