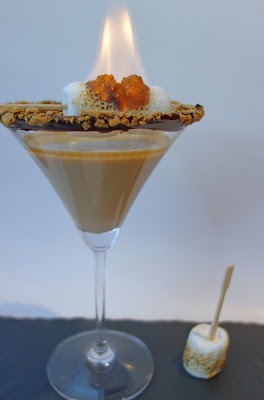 Turn the martini glass upside down and dip and twist in the melted chocolate. Then, dip the glass in the crushed cereal. Set aside.

Fill shaker with ice, pour in all of the liquid ingredients and shake to mix. Fill the rimmed martini glass. Top with a skewered marshmallow and light with a torch to roast.

Enjoy and "Have a Golden Day!"
37 Cooks members receive products from our sponsors to work with to create their posts; no other compensation is given. All content is solely the opinions of our members. Members also write non-sponsored posts that do not feature any products. These are not compensated in any way..