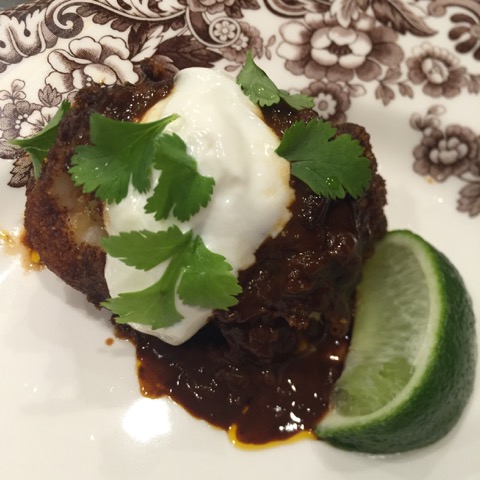 In 2005, family friends came to stay with us to escape Hurricane Katrina. The returned home to freezers and refrigerators of lost food. In 2008, they returned to escape Hurricane Gustav. This time they came bearing ice chests full of Gulf Coast delicacies. One of my husband's favorite meals was Gram’s Crab Cakes. The official recipe was Maryland Crab Cakes from Inside America’s Test Kitchen, but he still affectionately refers to them as Gram's Crab Cakes. This recipe combined with a simple mole sauce to create another family favorite. My youngest did prefer his shrimp without stuffing. This would also be great with chicken instead of shrimp.

Heat your olive oil over medium-low heat in a large, heavy-bottomed pan. I like my cast iron chicken fryer for this. Add the onion, garlic, oregano, cumin and cinnamon to the oil. Cook for about 10 minutes, until the onion is tender. Add your chili powder and crushed Chocolate Cheerios.

Stir until incorporated into the onion mixture. Slowly add the chicken broth and increase the heat to medium-high. Boil until the sauce reduces. When reduced it should be similar in consistency to a hollandaise sauce. While the sauce reduces ,you can prepare the shrimp and stuffing.

Be careful not to break up the crabmeat. Gently fold in the egg. The mixture should hold together at this point. If it doesn’t, more crushed Cheerios can be added. Stuff each shrimp with the crabmeat mixture. Each should hold a golf ball-sized mound of stuffing.

Drizzle your stuffed shrimp with olive oil and lightly coat with the mixture of Cheerios and spices. Place on a baking sheet lined with parchment paper. Bake at 350°F for 12-15 minutes, until shrimp is done.

Serve with mole sauce and enjoy!
37 Cooks members receive products from our sponsors to work with to create their posts; no other compensation is given. All content is solely the opinions of our members. Members also write non-sponsored posts that do not feature any products. These are not compensated in any way..