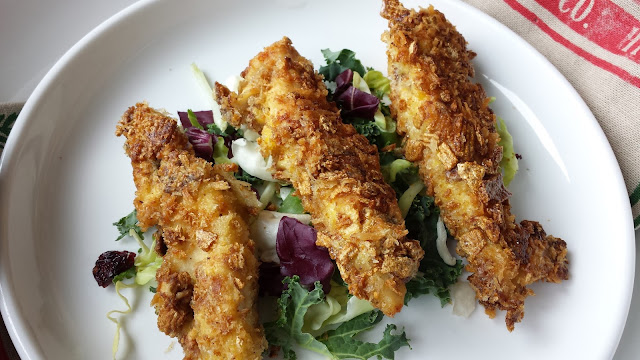 We love chicken at this house. I am always trying to think of new and exciting ways to mix it up with sauces, breading and different techniques and thankfully chicken is so versatile. We also are big fans of Golden Grahams cereal, so when this challenge presented itself, I jumped in knowing I would use the cereal as the crust on chicken!

Some words of advice before attempting this recipe. Make sure the chicken is cut thinly so it cooks quickly in an effort to avoid burning due to the sugar in the cereal. Also keep the heat at medium which will also help in that regard.

Everyone in the family loved these chicken fingers – crispy and delicious!

1/2 pound of chicken tenders – cut in half length-wise to make thinner fingers
1 cup of Golden Grahams cereal, crushed in a plastic bag with an implement of your choice
1 cup of panko bread crumbs
1 cup of flour seasoned with salt and pepper, 1/2 teaspoon of paprika
2 eggs, beaten with a splash of milk, salt and pepper
1/2 cup of canola oil


Salt and pepper the chicken fingers. It really makes a difference when you season at each step.

Create your dredging station as follows: One container with the seasoned flour, the second with the egg mixture and the third with the Golden Grahams crushed cereal and panko.

Heat the canola oil in a nonstick skillet or seasoned cast iron pan – to medium (around 300°F). Dredge each chicken finger first in flour, then egg, then the cereal mix. I like to place them on a rack inside a sheet pan to let them set up for five to ten minutes. Normally, I would recommend refrigerating to help the crust adhere – but you want these to cook quickly – so avoid that.

Fry four to six fingers for approximately two to three minutes on each side (your chicken fingers should be thin enough to be completely cooked in this short time) – watch them carefully – the first time I fried a few the oil was too hot and these fingers burnt quickly. Remove from oil and land them on another rack over a sheet pan – so they remain crispy.

These were so delicious! I served them with a honey barbecue sauce but they would be great with honey mustard or any sauce of your choice.
37 Cooks members receive products from our sponsors to work with to create their posts; no other compensation is given. All content is solely the opinions of our members. Members also write non-sponsored posts that do not feature any products. These are not compensated in any way..