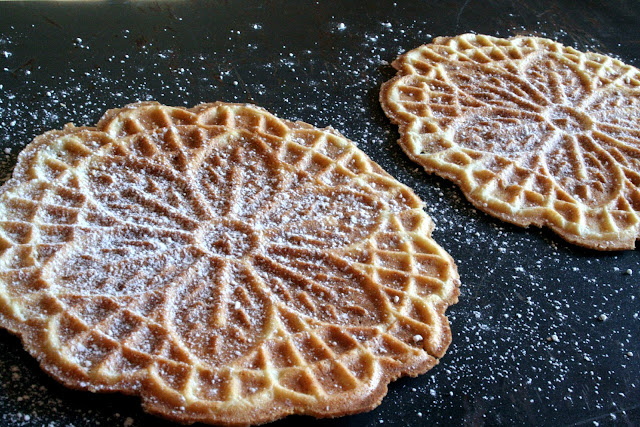 Carolyn's Pizzelles
by Al's mom, Carolyn & Al Hammermiller, and Willie, Sandra & Lauren Simmons
(This recipe was originally Al's mom's recipe and was made by Al & Carolyn for many years.)

Al and Carolyn were our first friends when we moved to Georgia. The "go out to dinner and laugh for a few hours" kind of friends. And we remained that kind of friends until one day, when we learned Carolyn had breast cancer for the second time. For me, our friendship deepened instantly. I can't explain it and it doesn't matter. Carolyn understood it. I think everyone felt similarly in those days because all of Carolyn's family, friends, and neighbors did so much to make those final months, weeks, days, and hours full of love and laughter. And wow, did everyone do a good job. Despite the fact that I was losing my friend, I have some great memories of some of those days. I think we all do. The morning Willie and I showed up in our pajamas and made brunch for Carolyn and Al and their family was one of the many and best.

Now, why am I telling you this story at Christmas? Partly because many of us have family members who we've lost and we miss them very much, especially during the holidays. My remedy is to celebrate! Carolyn made pizzelles in December every year and her family loved them. Willie and I invited Al over, pizzelle maker in hand, and we made them one afternoon. I know Carolyn approves. And I'm sure she'd approve of the stories Al told while he was here. Like the fact that Carolyn mixed up the batter and then left with her twin daughters, Stephanie and Katherine, to go Christmas shopping. Al make all the pizzelles! Haha! And he sure is good at it! See my notes below! 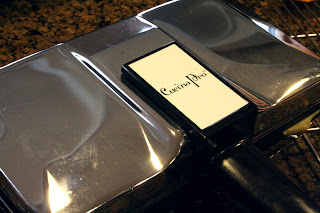 Beat the eggs and sugar gradually. Beat until smooth. Add the cooled melted butter and vanilla. Add the flour and baking powder.

The dough will be sticky enough to be dropped by spoon.

Use 1 heaping teaspoon per pizzelle.

*My notes. This makes many, many pizzelles. I found that the bigger the heaping teaspoon I used, the prettier the pizzelle was. Lauren found that she could easily trim the pizzelles with scissors and make them look perfect. We kept all the trimmings, ziplocked them, and tossed them in the freezer with our ice cream to use as a future ice cream topping. Al was instrumental in watching the light on the pizzelle maker since Lauren and I were constantly talking and forgetting to pay attention. Willie made burgers for all of us and kept Al supplied with beer. We had a great afternoon.

You can use a sieve to sprinkle your pizzelles with a little powdered sugar like we did. Another option that we never tried but thought about later is to melt some chocolate and either drizzle one side of your pizzelle with chocolate or spread it more completely over one side and let it dry. YUM! When I told my friends in 37 Cooks that I was planning to make these, they suggested trying a variety of extracts, doubling the vanilla, and grinding up some nuts and adding them to the batter. All sound amazing to me.


37 Cooks members receive products from our sponsors to work with to create their posts; no other compensation is given. All content is solely the opinions of our members. Members also write non-sponsored posts that do not feature any products. These are not compensated in any way..