Hi readers! Three of our lucky cooks recently had the great opportunity to review boxes they received from a great company called Try the World. For the next three days, along with the recipes we're sharing from our current challenge, you can also check out the reviews and enjoy the recipes created by our friends Lindsay, Traci and Matt! Their boxes contained goodies from the country of Brazil! First up is Lindsay's Guava Cheese Ice Cream! Yum! 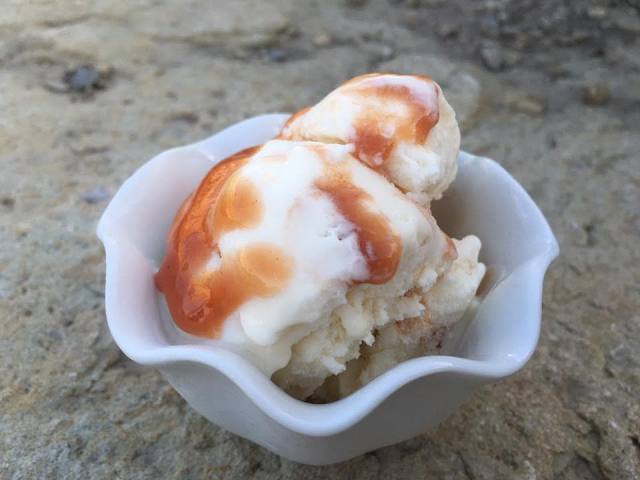 Try the World is a subscription box that you can receive monthly or bimonthly. Every box features artisanal products from a specific country. The box arrives with a handy little card that tells you about the items in your box, where they originate and some suggested ways to use the items. I received the Brazil Box to review. I loved that there were items in the box that I have never tried. I like to expose my kids to a lot of cultures and the food from other countries. I think that my kids were just as excited to look at each new item in the box as I was. Try the World also has an online magazine in which they feature additional recipes and tips to plan a party using the box that you received. They also have a playlist on Spotify that correlates to the country of the box you received, perfect to set the atmosphere while you cook or have a party. Churrasco (BBQ) is something that Brazil is well known for and there are several items in this box to throw a great churrasco party. These are the items that arrived in my Brazil box: 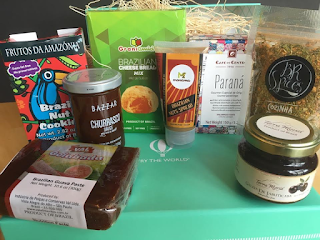 Churrasco Sauce: A BBQ sauce from an acclaimed restaurant in Rio de Janeiro. Suggested uses include spreading it on pizza dough or adding it to a sandwich.

Parana Coffee Grounds: A single origin coffee bean from the Parana region. The roasting process leaves it with caramel and hazelnut flavor. I can’t wait to make iced coffee. It can also be added to baked goods.

Churrasco Spice Mix: A dry rub or seasoning for a BBQ. This mixture includes garlic, onion, paprika, parsley, thyme, rosemary, and turmeric among others.

Jabuticaba Jam: A black berry that is unique to Brazil made into jam, I love that this jam is made with a small amount of sugar. It can be mixed into yogurt, added to thumbprint cookies or a caipirinha (I will be making those!)

Pao De Queijo Mix: Brazilian cheese bread mix. The bread is crunchy on the outside and doughy and cheesy in the center it is a breakfast and snack food in Brazil. 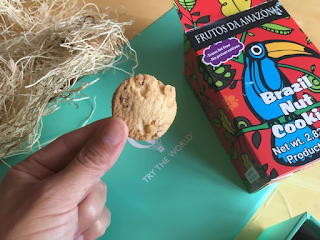 to hide them from my kids, but I was nice and shared. They did not last long.

Goiabada: Guava paste. Suggested uses include melting it into a meat glaze or serve with a semi-soft cow’s milk cheese. I like to melt it with butter into a glaze for carrots or make guava cheese turnovers.

Brazilian Nuts Spread: This is a mixture of three nuts peanut, cashew and baru. Baru nuts are native to Brazil and contain over 25% protein! Suggested uses include a PB&J or sliced apples. I used it on banana slices with a little melted chocolate and froze them for a nice little snack.

1. Mix cornstarch with 2 Tablespoons of milk in a small bowl. Set aside. In a large heat proof bowl stir together cream cheese and salt. Set aside.

2. In a 4 quart saucepan over medium heat bring the remaining milk, cream, sugar, and brown rice syrup to a boil. Allow to boil for four minutes. Remove from heat and stir in the cornstarch mixture. Return to heat and while stirring allow to slightly thicken.

4. Place the hot water and guava paste in a high speed blender or food processor. Blend scraping down the sides as needed until you have a smooth spread. Transfer to a jar or bowl and allow to cool in the refrigerator until needed

5. Freeze according to your ice cream machine directions. Layer the churned ice cream with the guava spread in an ice cream storage container. Place in your freezer for 4 hours or until completely frozen.

We really love the box that I received from Try the World. The one thing to keep in mind is to check the expiration dates on all items and have fun!
37 Cooks members receive products from our sponsors to work with to create their posts; no other compensation is given. All content is solely the opinions of our members. Members also write non-sponsored posts that do not feature any products. These are not compensated in any way..