Hi readers! Here is our third and final Try the World review and recipe! Today we bring you Matt the Butcher's amazing Churrasco BBQ Pork! 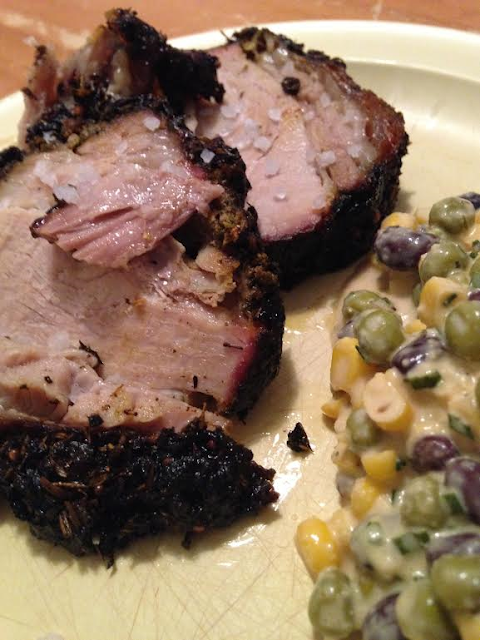 As a member of 37 Cooks, I was one of the lucky three that received a Try the World box to review and, of course, to cook with! I got a Brazil box and was pretty impressed. It was packaged well and contained eight different items. Churrasco dry spice mix, Brazilian coffee, a jar of churrasco sweet bbq sauce, a jar of jam made from a blackberry that is found only in Brazil, a tube of nut butter made from Brazil nuts and cashews, a box of cheese bread mix, a packet of shortbread cookies with chopped Brazil nuts in them, and a block of Brazilian guava paste. These were not simply little sample packs. The coffee, for instance, was a little over 5 ounces, more than enough for a couple of pots of coffee. 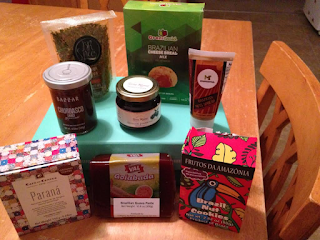 Also included in the box was a Culture Guide, which I thought was pretty cool. It's about the size of a greeting card, and opens five times. It tells you all about the products in the box, with ideas on how to use them. On the reverse side, there's a menu using the products.

Here's a recipe that I made with the dry Churrasco spice mix. As soon as I saw the Churrasco spice package, I knew I was gonna make something on the BBQ. I just got a new grill and was dying to try it out, along with the rotisserie attachment! Here goes....

1 packet Churrasco Spice Mix
1/4 to 1/3 cup olive oil
3 to 4-pound Boston butt, tied with cotton twine (The only reason it needs to be tied is if it's going on a rotisserie. I say cotton, because if ya use polyester twine, it'll melt and that would totally suck.)

Combine the spice mix with just enough olive oil to make a very thick paste. Rub it all over the meat, 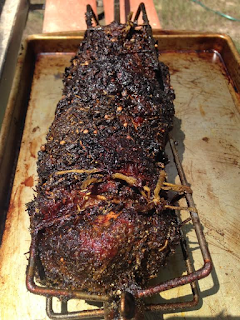 really working it in, and use all the rub. Wrap the meat tightly in plastic wrap and refrigerate overnight. I cooked mine for about 5 hours, using indirect heat on my BBQ. You can either BBQ it, or roast it in the oven.

To roast it in the oven, place the meat in a baking dish and bake at 275°F for 4 or 5 hours, until the internal temp is about 185°F. Tent with foil if it looks like its burning before it's done.

Low and slow is the key to a nice, tender Boston butt. I like mine almost falling apart. I couldn't use a probe thermometer on mine, as it was going round and round on a rotisserie, so after about 3 1/2 hours, I started poking it with a pointy knife, to see if it was done. When the knife slid in with hardly any resistance, that baby was done! And it was absolutely delicious!
37 Cooks members receive products from our sponsors to work with to create their posts; no other compensation is given. All content is solely the opinions of our members. Members also write non-sponsored posts that do not feature any products. These are not compensated in any way..