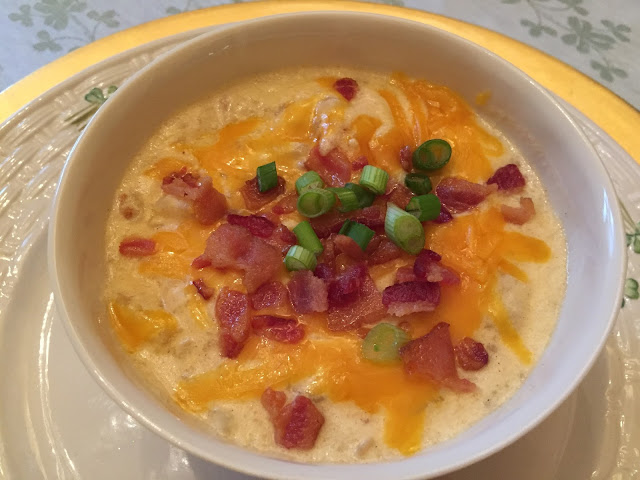 Cut bacon into strips and fry in large Dutch oven pot over medium heat until crisp. Remove bacon pieces from pot and place on paper towel. Drain approximately half of the bacon grease and discard. In the remaining grease, cook diced onion and celery over a low heat until they become soft, approximately 3 minutes. Add flour to Dutch oven and stir with onion and celery over low heat for 1 minute. Pour all of the milk into the mixture, stirring frequently and cook until it starts to thicken.

Unwrap baked potatoes from aluminum. Peal skins off of potatoes and discard. Cut potatoes into small cubes. Place potato cubes into the pot. If you prefer a thicker consistency for the soup, smash some of the potato cubes with a potato masher or back of spoon.

Stir in remaining 1 Tablespoon Jada Foods Low Sodium Chicken Salt seasoning, pepper, 6 ounces of grated cheese, 4 ounces of sour cream and 3/4 of the cooked bacon. Continue to cook and stir until the cheese is melted and soup is bubbly. Remove from heat.