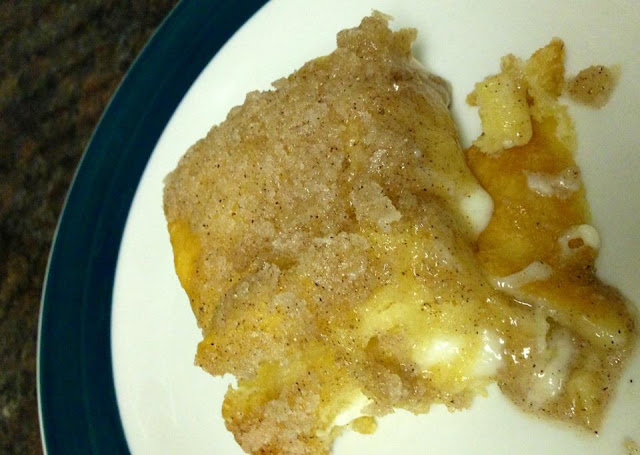 Preheat the oven to 350 degrees F (175 degrees C). Spray a 9x13 inch baking dish with cooking spray.
In a bowl, beat the cream cheese with the vanilla bean seeds and 1 cup of sugar until smooth.
Unroll the cans of crescent roll dough, and use a rolling pin to shape each piece into 9x13 inch rectangles. Press one piece into the bottom of a 9x13 inch baking dish. Evenly spread the cream cheese mixture into the baking dish, then cover with the remaining piece of crescent dough. Stir together 3/4 cup of sugar, cinnamon, and butter. Dot the mixture over the top of the cheesecake.

Bake in the preheated oven until the crescent dough has puffed and turned golden brown, about 30 minutes. Remove from the oven and drizzle with honey. Cool completely in the pan before cutting into 12 squares.
37 Cooks members receive products from our sponsors to work with to create their posts; no other compensation is given. All content is solely the opinions of our members. Members also write non-sponsored posts that do not feature any products. These are not compensated in any way..