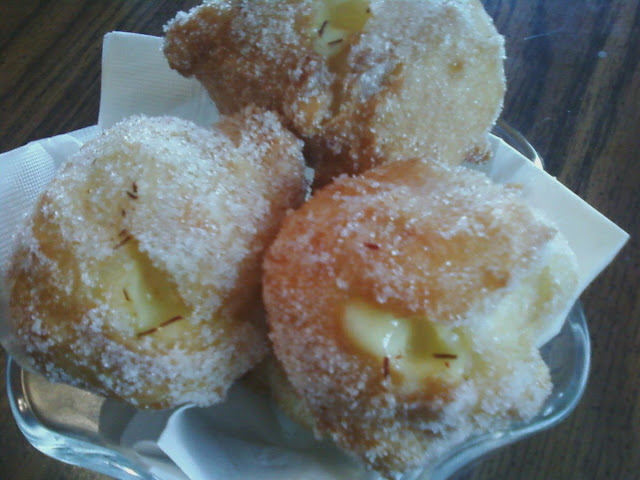 Sift the flour and salt together, then stir in the sugar. Heat the butter and water in a large saucepan over low heat until the butter melts. As soon as the butter melts, increase the heat and bring quickly to a full boil. Add in the flour mixture, remove from the heat and stir vigorously. The mixture should form a smooth paste which leaves the sides of the pan clean. Do not beat the paste at this stage or it will become oily. Set aside to cool for about 15 minutes.
I like to refrigerate it in a large bowl at this point for about 15 minutes. You don't have to; I have just found it easier to handle portioning it for frying.

Heat the milk and saffron gently until just boiling in a medium saucepan. Remove from the heat and cool slightly. Beat the egg yolks with the sugar until pale and thick, then stir in the flour and cornstarch. Gradually stir the milk into the egg and flour mixture. Pour the custard back into the saucepan and heat gently, whisking continuously until the mixture thickens and boils. Boil for 1 minute, stirring continuously. Pour into a large bowl or a shallow dish and cover with plastic wrap. Set aside to cool. Beat until smooth before using. Pour into a pastry bag with a tip and set aside. NOTE: To avoid a lumpy mixture, vigorous mixing is essential throughout cooking. Do not be alarmed if lumps form, just beat hard and they will break up as the custard thickens and comes to a boil.

Mix together the sugar and cinnamon in a large bowl. Set aside.

Putting it all together:
Heat a large saucepan with vegetable oil filled up to 2/3 of way full to 350F. You can also use a deep fryer if you have one. Portion off about 1 tablespoon of choux paste for each benuelo and gently slip into the hot oil. Do not overcrowd them as they will puff up to twice the size. Cook them about 8-10 minutes, gently turning them with a slotted spoon until they have puffed up and become golden brown. With a slotted spoon, take them out of the oil and let the excess oil drain back into the pan. Drop them into the bowl of cinnamon sugar and turn to coat. Poke a hole in them using your pastry bag filled with saffron pastry cream and gently pipe the pastry cream into the benuelo until full. Roll filled pastries gently in cinnamon sugar. Serve warm.
37 Cooks members receive products from our sponsors to work with to create their posts; no other compensation is given. All content is solely the opinions of our members. Members also write non-sponsored posts that do not feature any products. These are not compensated in any way..