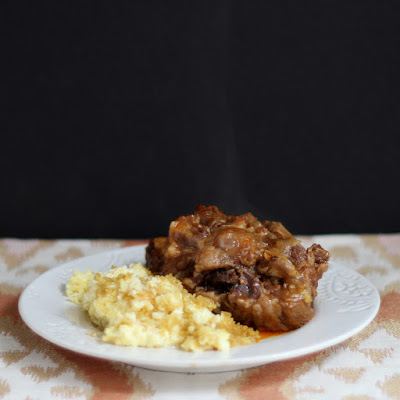 Oxtails are one of my favorite foods, and a throwback to my childhood. My mom often made them with a tomato sauce with a hint of barbecue, but I've expanded my oxtail repertoire a bit. But still ... I often make them with a red sauce - and this recipe is no exception.

If you've never tried oxtails, they're kind of weird to look at. The flavor is similar to any of the tough cuts of beef like stew meat or short ribs. Give them a try!

Since the whole point of an Instant Pot is to make dinner fast and easy, I decided to create a super-easy recipe. I used a little cheat - a jar of sofrito. While in theory you can make your own sofrito, the one in a jar has a spice that I've never seen anywhere - culantro.

Nope, that's not a misspelling of cilantro. It's a different herb. It's sort of like cilantro, but it's not. Just like marjoram isn't oregano.

Oxtails with Sofrito
By Donna Currie from Cookistry 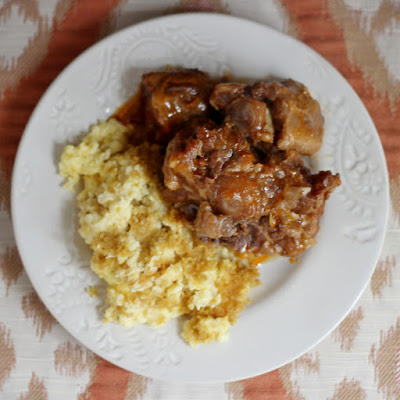 Place all ingredients in your Instant Pot. Put the cover on and make sure the knob is set for sealing and not for venting.

Press the "meat/stew" button and make sure it's set for 50 minutes.

When the time is up, turn the cooker off (or, if your Instant Pot has the feature, you could simply set it ahead of time to not go to the warm setting) and wait 15 minutes before releasing the remaining pressure.

Serve immediately (skim off any excess fat on top of the sauce, if there's a lot) or transfer to storage containers and refrigerate. I like stewed meats best if they've been chilled and reheated, but it's up to you. If you refrigerate, the fat will rise to the top and harden, making it easier to remove. Just pull that off, reheat, and serve.

I served these with polenta, but they'd be great with rice, potatoes, or noodles to sop up all the extra sauce.

You can follow Instant Pot on Twitter or Facebook. Want to chat with other Instant Pot users? There's a very lively Facebook group dedicated to the pot!
37 Cooks members receive products from our sponsors to work with to create their posts; no other compensation is given. All content is solely the opinions of our members. Members also write non-sponsored posts that do not feature any products. These are not compensated in any way..