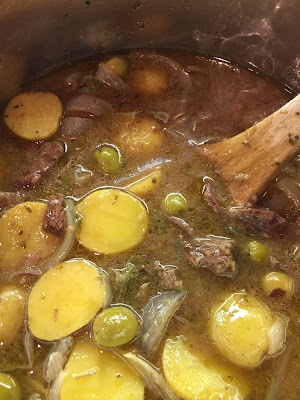 Several years ago we had dinner with friends. One friend told us about growing up in Miami and his large Cuban family. He made us a family favorite, Cuban Chicken. I remember olives, capers and onions. I could envision steak prepared like this too. When my Instant Pot arrived, all I could think about was those flavors. I decided to make a stew with all of the things I loved that night.

Add meat, 1 teaspoon of cumin and 1 teaspoon of dried oregano to sherry and cover with 32 ounces of beef stock. Cook for 20 minutes using your Instant Pot's meat/stew feature. Allow pressure to release naturally. Once pressure has released, open and add onion, potatoes, olives and capers. Salt and pepper to taste. Put the lid back on your pot and cook 10 minutes on meat/stew feature. Release pressure naturally and enjoy.
37 Cooks members receive products from our sponsors to work with to create their posts; no other compensation is given. All content is solely the opinions of our members. Members also write non-sponsored posts that do not feature any products. These are not compensated in any way..