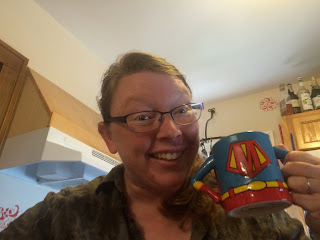 Hiya, I’m T.S. Lamb (or Tiffany). I’m Michigan born and bred, though I did live in Ireland for 1 year. I’m 42 and married for 15 years. I get to share my house with my awesome husband, Geoff (he’s my co-chef and the more experimental cook. He is still trying to teach me the correct way to mince veggies). We have two kids, Sloan, who is 10 and Evelyn, who is 6 (both budding chefs), and 3 cats (who aren’t). When not cooking I’m an artist, illustrating children’s books and creating anything from pinups to wedding invitations and sort of running a business called Epiphanies. I have been known to ruin food by forgetting about its cooking while doing artwork (Crockpot recipes suffer an inordinate amount from this).


I love most anything outdoors and our family does a lot of bicycling, kayaking, hiking, cross-country skiing, and picnicking. So I’ve developed a love of portable foods. I grew up on what is normally termed “midwest” cooking, not known for bold flavors. I think my first really remembered story about cooking was watching my dad try to make rolls for an anniversary dinner with my mom. He made lobster and other stuff (it didn’t matter to my brothers and I - we just remembered the rolls). He misunderstood the roll recipe where it said “roll to 1/2" thick and cut”. Well he rolled the dough out like a kid rolls a snake of playdough and cut 1/2” thick slices. I swear there were thousands of little rolls all over the kitchen. I remember he ran out of space and looked really panicked. My mom still says it was the best anniversary dinner because of that.

I sometimes experiment with Irish foods, but I LOVE our 4 seasons in Michigan and all the different types of foods that go with them. I never really consider myself a cook, I suppose I consider Geoff the cook and I am more the baker. A lot of our food experimentation is because my hubby likes bolder flavors and partially because we started having dinner parties.

I love dinner parties! and food parties! It's a great way to experiment with food and have a good exchange of ideas and discussions of flavors, textures, recipes, etc. (I’ve become enamored with the texture of foods in the last year or two). I’ve even gotten my slightly introverted hubby interested in them. To date, the Murder Mystery Dinner has been the best (all dishes influenced by Murder Mystery books) and the Sensuous Food Party as the lamest (its just a hard concept to describe to people...and we probably need to try with different folks).

The recipe below is one my hubby came up with for a brunch with my friend, Maurita. Fun and easy recipe and even the kids loved it.

Geoff here. As I no longer have a sense of smell, much of my cooking is affected by equal parts taste memory and texture. Many of my dishes are steeped in childhood memories of sitting at my grandparents' kitchen. One of my favorite snacks growing up was Welsh Rabbit. I recently "punched it up" to serve as a main dish for a Sunday Brunch, thus was born Eggs Rarebit. 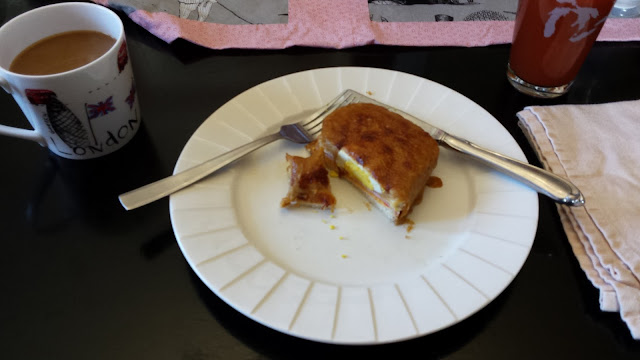 Eggs Rarebit
by T.S. Lamb and her husband Geoff

The Topping:
1 teaspoon of prepared horseradish (or mustard powder)
1 Tablespoon of Worcestershire sauce
2 bottles (12 ounces each) of Stout
3 cups of shredded Cheddar (I prefer a mix of mild and sharp)

On a griddle or in a heavy pan, melt 1 Tablespoon butter and toast the bread slices on both sides. Using a 2-inch circular cookie cutter, cut a hole in the center of eight of the toast slices. Set the toast aside and feed the toast circles to ducks or nearby children.

Add water to a 12-inch skillet until it is 1-inch deep. Add the vinegar and simmer over medium heat. poach the eggs two to four at a time (whatever you're comfortable with) for five minutes per batch (seven to eight minutes will yield a firm yolk, if that's what you prefer). Remove with slotted spoon to a bowl with warm water until assembly time.

Move your oven rack to the middle and preheat your broiler for the highest setting.

In a 2-quart saucepan, mix the horseradish, Worcestershire sauce, and one bottle of stout. Reserve 1/4 cup of the second bottle and drink the rest. Simmer the mixture until it reduces by half. Slowly stir in the cheddar cheese until it is all melted and the mixture is slightly thicker than sour cream. Thin out with the reserved stout as needed. Once the mixture is perfect, drink the remaining stout. 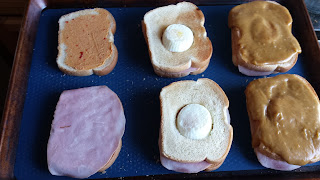 Once the cheese is ready, it is time for assembly.

On a half-sheet pan, place six to eight of the uncut toast slices. Spread each slice with a thin layer of hummus and add a slice of ham. Top these with the cut toast slices. Within the cut-out section, place a poached egg. Top each "sandwich" with enough of the cheese mixture that it spreads slightly over the sides (I find that a spatula works great here).

Place on the center rack for 10 minutes. The cheese will be bubbly and begin to brown into a delicious crust.

Serve immediately. Yields 8 servings (less if you're very hungry).
37 Cooks members receive products from our sponsors to work with to create their posts; no other compensation is given. All content is solely the opinions of our members. Members also write non-sponsored posts that do not feature any products. These are not compensated in any way..