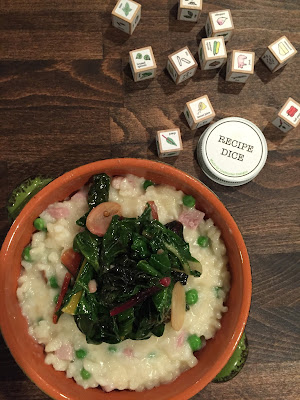 My approach to cooking is to find inspiration all around me. Cookbooks, magazines, TV shows, what’s in the fridge, what’s on sale, what’s in season, what IS the season, all are sources of inspiration. Now I have a new source of inspiration. The Recipe Dice from Leafcutter Designs. The little glass jar is about the size of my spice jars and fits perfectly in my spice drawer.

Yesterday, I finally had some time off and no commitments other than to do what I want. And I wanted to cook. I opened up the spice drawer and saw the Recipe Dice and thought, “well, let’s give ‘em a roll.” I’m sure they came with suggestions on how to use them, but of course I promptly misplaced them. Simply put, these are dice. One just needs to roll them.

This roll turned up pork, rice, Parmesan cheese, Swiss chard, bell peppers, squash, Brussels sprouts, garlic, rutabaga, lemon, and mint. I checked my fridge to see what I had: A big chunk of ham, various bits of cheeses, Swiss chard…okay this was promising. I check my pantry and find Arborio rice…in my head an idea is coming together. I eliminate a few veggies and dial into what my brain and my stomach are telling me. I’m thinking risotto. With ham. And peas. And lots of cheese, not just Parmesan. I think I need the Swiss chard as a foil for the richness of the risotto. Now, I’m zipping around the kitchen thinking about risotto. I’m also feeling quite pleased with myself for having made several quarts of chicken stock a few weeks earlier and stashed it in the freezer. Yes. This dish was meant to be.

Ham and Pea Risotto with Swiss Chard
by Woo

Before starting the risotto, prep the chard. Chop, wash, and drain the chard. Set aside. Peel 3-4 large cloves of garlic and slice. In a large skillet add two Tablespoons of extra virgin olive oil, the garlic, two big pinches of crushed red pepper flakes. Heat the large skillet containing the olive oil and garlic. When the garlic is just starting to color, add the majority of the chard, salt, layer the remaining chard, salt. Using tongs, turn or stir the chard to cook evenly and quickly sauté. Remove from heat. Set aside. Just before the risotto is finished, reheat briefly, squeeze a little lemon juice over the chard or sprinkle a touch of red wine vinegar.

Heat the olive oil in a heavy saucepan over medium heat. Add the finely chopped onion and cook until almost melted in texture and golden. Stirring as needed. This took me about 10 minutes. Add the Arborio rice and stir to coat in the olive oil and get the rice grains slightly toasted about a minute or two. Increase the heat a tad. Add the white wine. Stir constantly. When the wine is half absorbed add a cup of the simmering chicken broth. It should just cover the rice. Stir, stir, stir. When the broth has absorbed into the rice, add another ladle and stir. (Fire the chard. Heat the large skillet containing the olive oil and garlic. When the garlic is just starting to color, add the majority of the chard, salt, layer the remaining chard, salt. Using tongs, turn or stir the chard to cook evenly. Don’t forget to stir the risotto! Remove chard from heat. Set aside. Just before serving squeeze a little lemon juice over the chard or sprinkle a touch of red wine vinegar.) Repeat until the rice is almost ready, add the ham and peas, and one more ladle of broth. Stir. Add the cheeses. Stir until incorporated. Adjust seasoning. Add butter and stir well. Use a little more broth to adjust the consistency. I like a risotto that “relaxes” into the bowl or plate instead of piling up like a hill. Serve the ham and pea risotto with a big tangled mess of the sautéed chard on top. The chard adds texture and a brightness to the rich risotto. Trust me on this pairing. It works.
37 Cooks members receive products from our sponsors to work with to create their posts; no other compensation is given. All content is solely the opinions of our members. Members also write non-sponsored posts that do not feature any products. These are not compensated in any way..