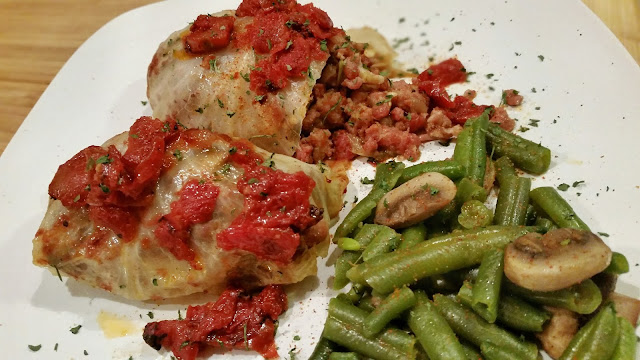 The second dish from this fun challenge with Leafcutter Designs threw me for a loop!

The remaining Recipe Dice were eggplant, cabbage, green beans, mushrooms, and onions. My grandmother makes rice dressing using pork and eggplant. I have never done that before and when this came up I thought that I'd give it a shot! So, I took some of our Jalapeno Pork Sausage stuffing and cooked it with some eggplant, mushrooms, and onions just like a rice dressing. Here's what happened:

Start by peeling the cabbage and dropping the leaves into a pot of boiling water to soften them, about 5 minutes. Remove them from the pot and dry with paper towels.

Divide the stuffing into portions for about 8-10 rolls. Place stuffing in center of cabbage leaves and roll like a burrito. Use toothpicks to hold leaves together. Position cabbage rolls in a baking dish and top with tomatoes. Cover dish and place in oven at 350°F for 1 hour.

Once done, remove from oven and serve!
37 Cooks members receive products from our sponsors to work with to create their posts; no other compensation is given. All content is solely the opinions of our members. Members also write non-sponsored posts that do not feature any products. These are not compensated in any way..