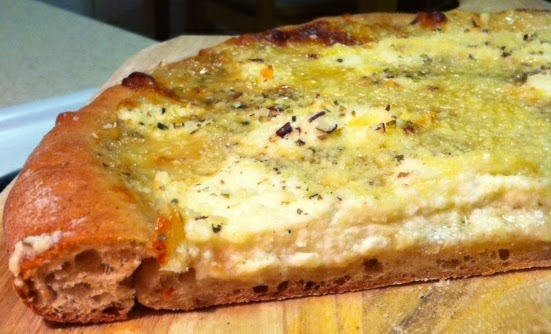 I like to make pizza at home, probably about once a month or so. I've tried different making style pizzas, and I've been very happy with the Detroit style pizza, but I'm never happy when trying to replicate a New York style pizza. I just can't seem to get the crust the way I remember it from when I lived in NY. Everyone that's tried my pizza says it's really, really good, but I'm never satisfied with the crust. That being said, the kind folks at Bob's Red Mill sent all of us at 37 Cooks a 5-pound bag of white flour and a 5-pound bag of whole wheat flour to use in our recipes. As soon as I got my flour, I knew I was gonna make some pizza. While the pies I made are not authentic New York pizza, they were absolutely perfect! The crust on all of them was as close to a NY pizza as I've ever had! I made a cheese pizza, a pepperoni pie and a white pizza. Here's the recipe for the white pizza.

For the crust, which makes enough for three 12" pies:


Mix the honey with the warm water, then stir in the yeast, and let it sit for about 10 minutes. It should look all foamy, and smell nice and yeasty! Put the flour and salt in a mixer 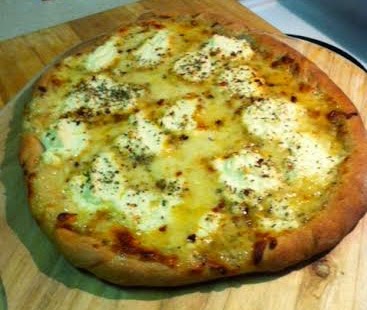 bowl, put the bread hook on, add the water/yeast mixture to the flour and mix on medium low speed, adding the oil as it's mixing. Once everything is incorporated, let it knead for 8-10 minutes. I find that I need to add a few Tablespoons of flour as it's kneading. The dough needs to pull away from the sides of the bowl and be pretty smooth.

I usually make my dough 3 days before pizza night, portioning it out in three equal portions, then put each dough ball in a separate gallon-sized freezer bag, along with a Tablespoon or two of olive oil, and let 'em rest in the fridge. But for this pie, I made the dough in the morning, stored it in the fridge for about four hours and took it out about 2 hours before the actual pie making. When you're ready to make a pie, put a pizza stone in the oven, on the next to lowest rack, and preheat the oven at 500°F for 45 minutes.

Put the chopped garlic and the olive oil in a small saucepan over medium heat and let it cook until the garlic is very soft, stirring occasionally. Do not let the garlic get brown, as it will be bitter. Once the garlic is soft, add the heavy cream and the salt. Bring to a very low boil, then lower the heat to medium and let the mixture cook down a little for about 10 minutes, stirring occasionally. Take the mixture off the heat, taste and add salt if necessary and let it cool down a little while you're stretching the dough.

Take a dough ball, lay it on a floured surface and spread it out, using enough flour to keep it from sticking. Once you're happy with it, slide the dough onto a pizza peel that's been sprinkled with some cornmeal and a little flour to keep the dough from sticking to the peel. Top the crust with the mozzarella cheese, then spread the garlic mixture evenly over the cheese with a spoon and then top with generous dollops of the seasoned ricotta cheese. Sprinkle on a little oregano, or even some red pepper flakes if you wish, then carefully slide the pizza offa the peel onto the stone and bake for 8 to 10 minutes, until the crust is nicely browned.
37 Cooks members receive products from our sponsors to work with to create their posts; no other compensation is given. All content is solely the opinions of our members. Members also write non-sponsored posts that do not feature any products. These are not compensated in any way..