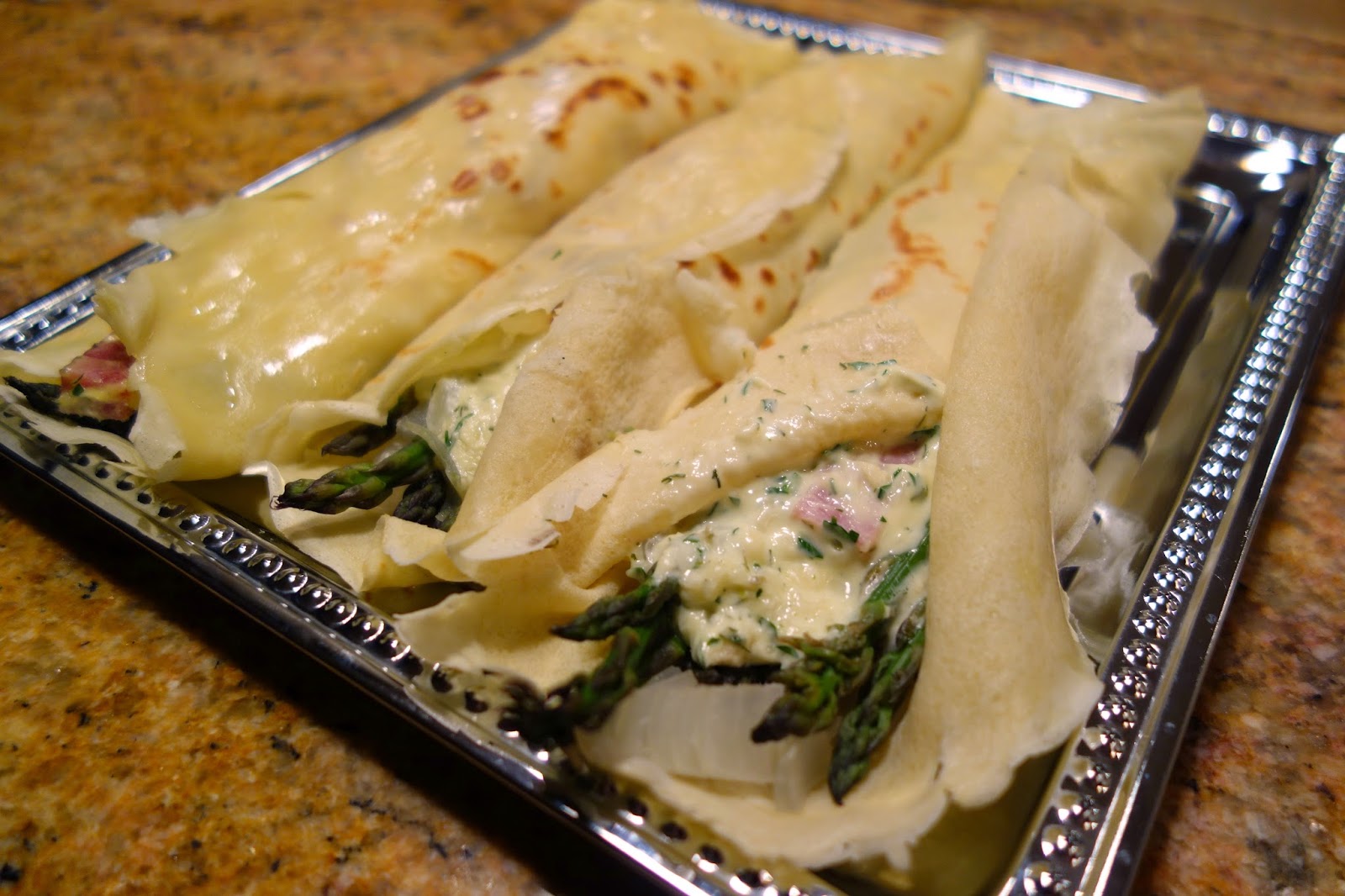 When my Dad used to make crêpes, I remember the whole family getting excited and involved in the process. He used an electric crêpe maker that he would dip into the batter and it would make perfect crêpes right there on the counter top. It was pretty awe-inspiring to his 9, 14, and 16 year old girls. We would all stand around in the kitchen and watch him enjoy the role as our gourmet chef. Back then, crêpes filled with chicken and a white wine sauce was pretty much the only thing that he made with crêpes, and I accepted that. I was 9. That was very gourmet to my palate.

Fast forward many years, and I marry a Frenchman. The first time that he took me to a crêperie in France, I have to admit that I was a little overwhelmed. I had a menu filled with so many different filling options sitting in front of me, and I had to pick one? Chicken filled crêpes weren't the norm? The world of crêpes opened it's door that day, and I have since enjoyed trying so many combinations filled in this perfectly thin pancake.

I still give my Dad an A+ for effort. He sure did his best to try to prepare our palates for adulthood.

Bob's Red Mill Organic Unbleached White Flour worked perfectly in this batter. It didn't clump and blended quite well, which resulted in tender crêpes, the backdrop to a delicious stuffing created by Lou Seibert Pappas.

Asparagus and Ham Crêpes
by Tonda
Adapted from Crepes: Sweet and Savory Recipes for the Home Cook

In a blender, blend the eggs, milk, water, flour, salt and melted butter until smooth, approximately 30 seconds. If necessary, scrape down the sides of the blender and blend for another 10 seconds. Cover and refrigerate for 2 hours, or overnight.

Gently stir the batter if it has separated while sitting. Heat a non-stick crêpe pan over medium-high heat until hot. Lightly coat the pan with butter, remove the pan from the heat, and pour approximately 3 Tablespoons of batter for a 6" to 7" pan, or approximately 1/4 cup of batter for a 9" to 10" pan. Quickly tilt and rotate the pan to coat the surface. Cook until the crêpe is almost dry on the top and lightly browned on the edges, approximately 1 minute. Loosen the edges of the crêpe with a metal spatula and flip it over. Cook the other side for about 15 to 30 seconds, until lightly browned. Repeat the process with the remaining batter, coating the pan with butter as needed.

Prepare the crêpes as instructed above. Preheat the oven to 350°F. Steam the onion and asparagus until the asparagus is crisp-tender, approximately 5 to 7 minutes. In a medium bowl, beat the egg and then mix in the cheeses, garlic, parsley, dill, ham and steamed vegetables.

Spoon 1/2 cup of the filling down the center of each crêpe and roll it to close. Arrange the filled crêpes in a greased 9" x 13" baking dish. Bake in the oven for 10 to 15 minutes, or until heated through.

Bon appétit!
37 Cooks members receive products from our sponsors to work with to create their posts; no other compensation is given. All content is solely the opinions of our members. Members also write non-sponsored posts that do not feature any products. These are not compensated in any way..