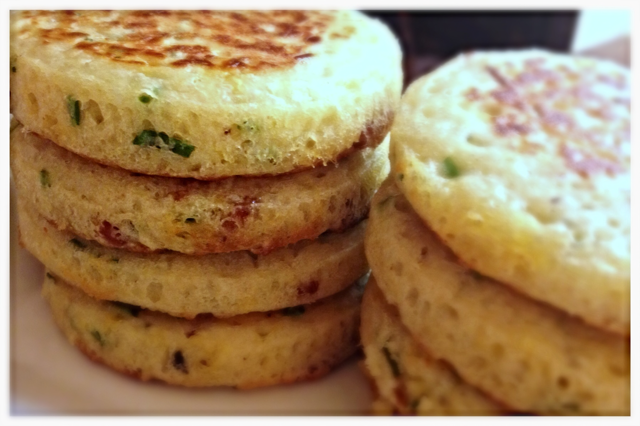 Did I mention that I married an Englishman? Well, I married an Englishman. And while my wonderful English husband loves all kinds of food from here in the USA and around the world, there are some traditional British treats that we can’t find locally. One of those is a freshly made English crumpet. I cannot tell you how happy he was to learn that I had decided to try making crumpets for The Bob's Red Mill Flour Challenge. My poor, suffering husband was forced to judge every attempt at crumpet-makery until he finally announced that I had found a recipe that was truly a traditional English crumpet. He’s been eating fresh crumpets for a week now. The recipe I came up with here is an adaptation of a traditional crumpet recipe. I combined the flavors of a southern bacon, cheddar, and chive biscuit with the traditional crumpet recipe and…WOW! They’re great served hot with a little butter. Or you could even use them as the bread for an egg sandwich. Bob’s Red Mill Organic Unbleached White Flour? $6.69 on Amazon. English crumpet rings? $6.05 on Amazon. Oh, so happy crumpet filled English husband? Priceless!

Cheddar, Cheese & Chive Crumpets
by Maryjo
Adapted from The Foppish Baker: Crumpets and from The Bread Book by Linda Collister and Anthony Blake

Mix 3/4 of a cup of the warm water, yeast, and sugar together in a small bowl and leave it to bloom for 5 to 10 minutes (until it gets foamy.) Meanwhile, sift together the bread flour, the Bob's Red Mill Organic Unbleached White Flour, and cream of tartar in a large bowl. When the yeast is good and foamed up, add it to the flour mixture along with the remaining 1 1/2 cups of warm water. Mix the batter until it is thick, but smooth. I tried beating the batter with a spoon but found it was so much easier to just use my hand. Vigorously beat the batter for about two minutes. Cover the bowl with plastic and let it rest for an hour.

After an hour, add the salt to the batter. Using your trusty hand again, vigorously beat the batter for one more minute. Cover the bowl again and let rest for another 15 to 20 minutes.

Warm the milk in a small saucepan or in the microwave oven, but be careful not to boil the milk. You’re basically just bringing the temperature up to about 100°F or so (close to body temperature.) Mix the baking soda into the warmed milk and gently stir the milk/baking soda mixture into your batter. Right before you begin cooking, add the bacon bits, grated cheese and chopped chives and gently mix them evenly into the batter.

Start by making only one crumpet just to test to see if your batter is loose enough. If it’s too thick it won’t form the nice holes on top. If it’s too loose, it will run under the bottom of the ring. Heat your ungreased griddle or frying pan for about three minutes over medium heat (it needs to be pretty hot.) I used an electric griddle set to 375°F. Spray the inside of the crumpet ring really well with non-stick spray and place it on the griddle. (Note: Spray the ring over the kitchen sink to limit the need for overspray cleanup.) Add about 1/4 cup to 1/3 cup of the batter to the ring. You basically want the crumpet ring to be about half full of batter (I’m a “half full” kind of gal.) As soon as the batter is in the ring it should begin to bubble and form holes, much like a pancake does. If you don’t see holes forming on the top, add a little more warm water to the batter (only 1 Tablespoon at a time) and start a new test crumpet.

Once you've managed to get the batter to the perfect consistency, continue cooking the remaining batter in batches, three or four at a time. After about 7 or 8 minutes, the top surface of the crumpet will “set” (they will appear dryer on top and covered with holes), the crumpet is ready to flip over. Remove the ring with tongs and gently turn the crumpet over with a spatula. Cook the top of the crumpet only until it turns slightly golden brown (usually only 1 to 2 minutes.) If your crumpet is cooking too fast and burning, lower your griddle or pan temperature a little bit at a time. The crumpets really will need a full 7 to 8 minutes to cook through before you flip them. Place your cooked crumpet on a plate to rest and start the next batch. Be sure to clean off and spray your crumpet rings well with cooking spray after each batch, otherwise the next batch might stick. Also, be sure to let your cooked crumpets cool a bit before eating (give them time to become more firm.) You can also freeze the cooked crumpet. Just let them cool to room temperature, put them in a zip-top bag and toss them in the freezer. To re-heat them, just let them thaw and put them in the toaster. Oh, and don’t forget to make a nice pot of English tea too. Cheers!
37 Cooks members receive products from our sponsors to work with to create their posts; no other compensation is given. All content is solely the opinions of our members. Members also write non-sponsored posts that do not feature any products. These are not compensated in any way..