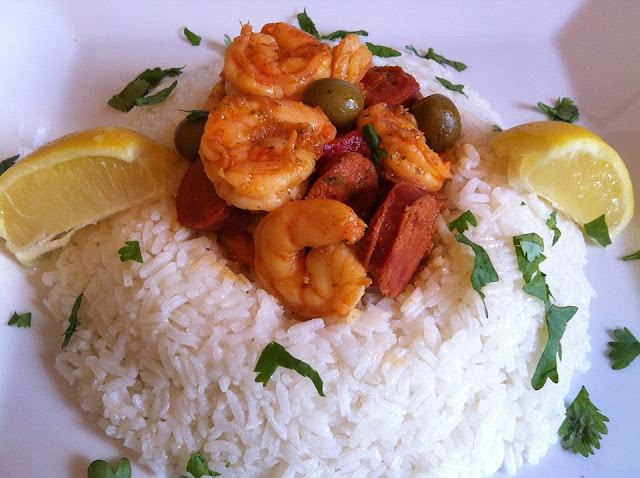 To be honest, I am new to cooking with Roux. When we were informed about the roux challenge I almost opted out until Gary Gee, who was familiar with my dishes from Facebook, talked me out of declining. I’m so happy that he did because the Roux totally worked in my dish. I have to give a shout out to my friend, Chef Daisy Martinez. It was from her that I learned to incorporate clam juice into seafood dishes, specifically Paella. Next time you make Paella, substitute clam juice for water. It will be the BEST Paella ever!

Sofrito Shrimp and Chorizo
by Carlos

In a large sauce pan, put in 2 Tablespoons of olive oil and heat on medium flame. Add sliced chorizo, and cook for about 6 - 7 minutes, turning once midway. When the chorizo is cooked and browned, remove from pan. Add 2 more Tablespoons of olive oil and then Sofrito. Sauté for about 5 minutes. Add the Kary's Dry Roux, packet of sazon, oregano and sea salt. Stir until well blended. Add alcaparrado, and sauté for one more minute. Add clam juice and lemon juice, and heat to partial boil. Lower flame, add shrimp and chorizo, and cover pan. Cook until shrimp turn pink, approximately 4 to 5 minutes. Place all contents of pan in your serving dish and garnish with chopped cilantro. Serve with white rice or tostones (fried green plantains).

Mix each ingredient, one at a time, into a food processor. Process to a chunky consistency, not watery.