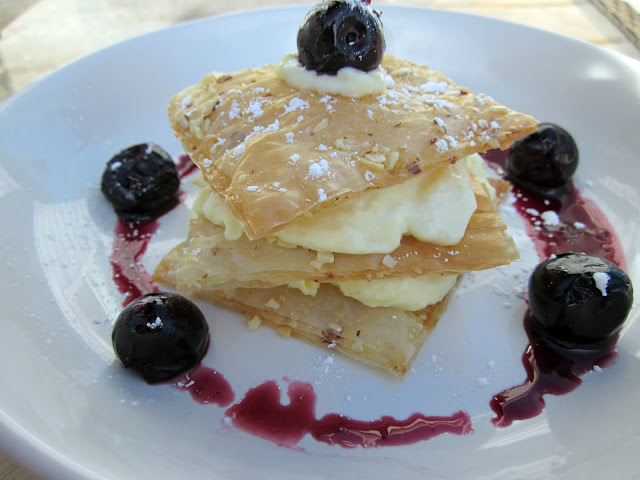 First of all, don't be scared to use phyllo dough. I have heard so many times that it's fragile, and will break, and you need to be so careful with it. Yes, it is fragile; yes, it will break; yes, you need to be careful with it. But it's not that difficult to handle. There are plenty of phyllo sheets in a package; it's okay to play with a sheet or two just to see what it feels like, how it acts, and then throw it away. I think the most important thing to remember is that you need to keep it slightly damp by placing a damp towel on top of the sheets you are not currently using. It will keep the phyllo from drying out. Dried out phyllo is almost impossible to work with. Once you have brushed it with melted butter, you don't have to worry about it drying out.

Repeat the process with the remaining phyllo dough on a second baking tray.

Bake the phyllo squares in a 350 degree oven until golden brown, 3-7 minutes. Cool and store in an airtight container until ready to use.

Combine the cream, vanilla bean, ginger and half the sugar in a saucepan. Heat over medium heat until sugar has dissolved. Allow the bean to steep for 15 minutes, then remove, scrape the seeds into the cream, and discard the pod. Combine the remaining sugar with the egg yolks and whisk until combined. Add about half a cup of the hot cream mixture into the yolk mixture and whisk. While whisking, slowly pour in the remaining cream mixture. Pour the mixture into a shallow baking dish (about 1-2 inches deep). Place in a water bath, and bake in a 325 degree oven for 50 minutes, or until it is barely set in the middle. Let cool and refrigerate for at least 4 hours, or overnight.

Combine all ingredients in a medium saucepan over medium heat. Bring to a boil, stirring occasionally, then simmer for about 10 minutes. Remove the vanilla bean, scrape out the seeds back into the pan. Simmer until the liquid is reduced by half and has a syrupy consistency. Cool and refrigerate.

To assemble:
Spoon about 2 ounces of the brulee onto a plate, place a phyllo square on top, and continue to alternate between the brulee and the phyllo with two more phyllo squares. Spoon the cherries and the sauce (either cold or warmed up) around and on top of the brulee. Garnish with powdered sugar.
37 Cooks members receive products from our sponsors to work with to create their posts; no other compensation is given. All content is solely the opinions of our members. Members also write non-sponsored posts that do not feature any products. These are not compensated in any way..