Two Asian-Inspired Dishes with Shiitake Mushrooms. And Quinoa. And Kale. And Sauces. And Other Stuff. 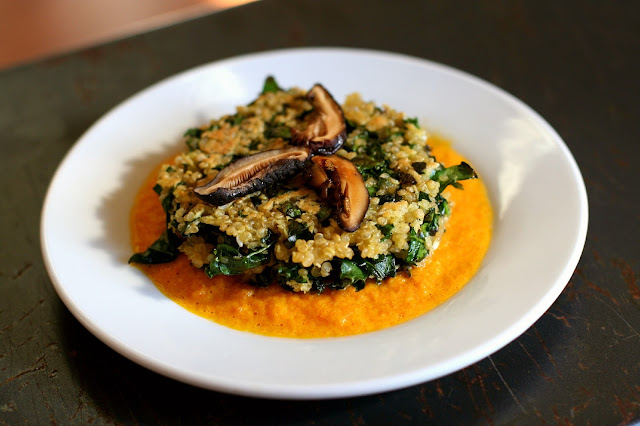 I couldn't come up with names for these dishes, ok! I tried for two days. I often come up with good ideas in my dreams or right when I wake up. Does that happen to you? All I got for two days was plain cake doughnuts with chocolate icing. The idea of them. Not the reality of them. Quinoa is full of protein and a little better for you than a chocolate doughnut. Quinoa isn't Asian, but tastes wonderful in both of these dishes.

While you are cooking the quinoa, let's make the sauces.

The first sauce is a carrot-ginger dipping sauce. It would be fantastic with spring rolls and since you will have plenty of sauce left over, you can make some spring rolls later in the week to dip in this sauce. To make the sauce, place the first 6 ingredients in a blender and puree the ingredients until they are smooth. Take the small top off the blender and with the blender still running, drizzle the oil very slowly and then the water. Turn the blender off and set the dip aside.

The second sauce is called Nuoc cham and this recipe will make plenty. I planned it this way so that you can make some Vietnamese Bun and use up the rest of the second sauce. To make the sauce, simply stir all 5 ingredients together until the sugar is dissolved. Set the dip aside.

To make the quinoa cakes, heat a skillet over medium to medium-low head. Add one tablespoon olive oil and then add the kale and cook for about 2 minutes until you see that some of the kale has become browned which will make it crispy. Remove from heat and let cool to room temperature.

In a medium mixing bowl, combine the quinoa, the kale, egg, mushrooms, sesame seeds, and Panko. You can do this with your hands or a spoon. Divide the mixture into 4 patties.

Heat a large skillet over medium to medium-low head. Add the remaining tablespoon of olive oil and then add the quinoa cakes and cook 3-4 minutes on each side until browned.

To serve, place some of the carrot-ginger dipping sauce on the plate and top with a quinoa cake. Press the cake down so the carrot-dipping sauce is visible. Top the cake with one to two teaspoons of  Nuoc cham dipping sauce. It won't be visible but it will add some wonderful flavor to the dish. Serve hot or room temperature.

If you reconstitute the mushrooms and make the quinoa ahead of time, this recipe comes together in just a few minutes.

Heat a skillet over medium to medium-low heat. Add the sesame oil. Add the ginger and onion and cook until the onion is transparent. Add the kale and zucchini and cook for about 4 minutes.

Add the white wine and cook until the wine evaporates. Add the soy sauce, brown sugar, cayenne pepper, and water and simmer for 2-3 minutes. Remove from heat. Add the quinoa and the mushrooms to the skillet and stir. 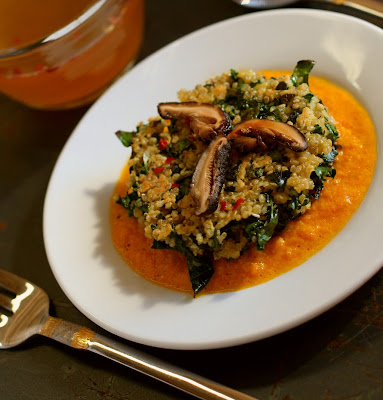