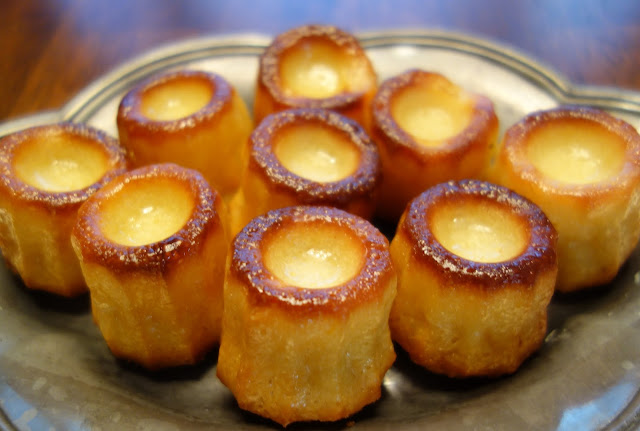 Pastries in France vary from region to region. The canelé hails from Bordeaux. This smaller than cupcake sized treat has a crunchy and chewy outside with a custard-like inside. True to the region, canelés are made with *vanilla and rum. However, other flavors can be substituted. In this version of canelé, I used Cointreau and orange extract from The Spice House. The orange flavoring in this extract is spot on. It's fruity without being overly orange or bitter. Oh. My. Yum. I am already planning frosted sugar cookies using this extract.

This recipe is best made by weighing the ingredients. Otherwise, the dough gets temperamental and will either puff too much or deflate like a fallen soufflé. Letting the dough rest in the refrigerator a day or two before baking also helps remove the air to render a custard-like interior.

Typical canelés are baked in copper molds lined with a mixture of butter and beeswax. Being that this was my first attempt at making this pastry, I opted for a more cost effective solution using butter-lined silicone molds. While the silicone molds did not produce the dark colored exterior that one would find using the copper molds, they did create the carmelized outer texture that are unique to this pastry. My American friends did not care about the color of these treats. They gobbled up two batches within a day. Even my French husband was singing my praise on these.

Add the milk and butter to a saucepan and boil until the temperature reaches 183°F. Remove the pan from heat and allow the liquid to cool. Add the flour, powdered sugar, eggs, Cointreau, and orange extract to a large bowl. Whisk until fully incorporated. Add the cooled milk and butter and whisk again to blend the ingredients. Cover and refrigerate for 24 to 48 hours.

Preheat the oven to 450°F. Melt a couple of Tablespoons of butter to brush inside the molds. Then, fill the molds 2/3 full with the batter. Set the silicone molds on a baking sheet and bake at 450°F for 15 minutes. Lower the temperature to 375°F, and bake and additional 40 minutes. This cook time is for the small molds. Immediately remove the canelés from the molds and allow to cool on a wire rack.

*To make the original recipe, slice open one Spice House Madagascar "Bourbon Islands" Vanilla Bean, and scrape out the beans into the milk and butter mixture. Add the sliced open bean to the milk before it boils to extract as much vanilla flavor as possible. Strain the cooled milk mixture through a fine sieve when adding it to the flour mixture.
37 Cooks members receive products from our sponsors to work with to create their posts; no other compensation is given. All content is solely the opinions of our members. Members also write non-sponsored posts that do not feature any products. These are not compensated in any way..