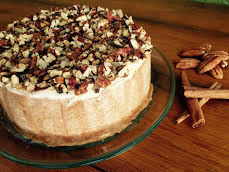 Cheesecake has always been a favorite in our household and when I found out that 37 Cooks would be sponsored by The Spice House for our second challenge with them, I jumped at the chance to put a spin on this traditional dessert by spicing it up a little bit. I hope you enjoy the sweet and gently spicy combination of cinnamon, honey and toasted pecans, along with the smooth and creamy finished texture.

Let the cream cheese, sour cream and eggs come to room temperature for about four hours. This step is very important to a finished cheesecake that has a smooth and creamy texture. I like to remove everything from the refrigerator when I’m enjoying my morning coffee, and then make my cheesecake after lunch on a leisurely Saturday.

Line the bottom and sides of your cheesecake pan with unbleached parchment paper, making sure to trim off any excess with a knife or scissors.

Be sure to line the sides all the way up, also cut a “round" of parchment paper that can be placed on top of the filling prior to cooking. This will easily be removed after cooking.

Prepare the crust by adding enough graham crackers to your food processor to equal 1.5 cups after it has been pulsed to the coarseness of your choice. Add melted butter, vanilla extract and a pinch of salt then mix until everything is moist and sticks together when gently pinched with two fingers.

Add crust mixture to the lined pan; I usually use all but approximately 1/4 cup of it. You can be the judge of how thick you prefer your crust. You can never have too much yummy crust with your cheesecake.

To prepare the filling, add cream cheese and honey to your stand mixer and beat until smooth. Be sure to scrape the sides down with a spatula two or three times during this process so that everything is nicely incorporated. Add sour cream, cinnamon, vanilla and salt to taste, then gently fold. Hand beat eggs in a bowl, then gently fold into cream cheese filling until just incorporated. Be careful no to over-mix!


Pour the filling into your neatly lined cheesecake pan and place the round of parchment paper on top. It should fit just inside the pan. Place the rack in the bottom of your Instant Pot and add 1 cup of water. Next, carefully place your cheesecake-filled pan inside the Instant Pot. Put the lid on and set it to “manual” for 30 minutes. Make sure that the pressure release valve is on “sealing”.
Once the timer is finished, let the Instant Pot release naturally. This means that you will leave the vent in the “sealing” position and the pressure will slowly release on its own. This takes about 10 minutes.

Remove the pan from the Instant Pot as soon it has naturally released and you are able to unlock the lid. Be sure that your cheesecake has cooled to room temperature before you place it in the fridge. This will prevent any cracking and will allow it to set nicely.

Toast pecans in a dry cast iron skillet until lightly brown, let cool then fine chop and set aside.

Once it has chilled in the fridge, prepare the topping in a small bowl by mixing together the sour cream, whipping cream and honey. Pour the sour cream topping on your cheesecake in a nice, thick layer, sprinkle liberally with pecans and drizzle with honey.

Slice, share and enjoy with your favorite people!
37 Cooks members receive products from our sponsors to work with to create their posts; no other compensation is given. All content is solely the opinions of our members. Members also write non-sponsored posts that do not feature any products. These are not compensated in any way..