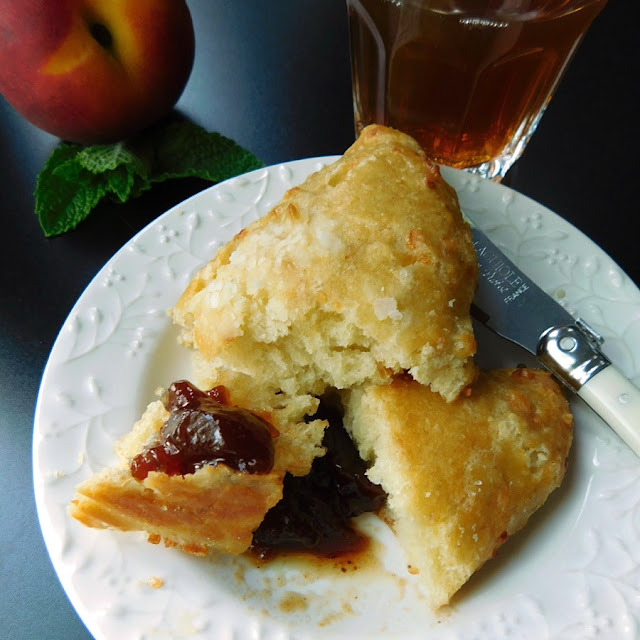 What do you do when someone sends you fabulous barbecue sauce? Mine is made by Jay Ducote, who you may recognize as a runner-up on Season 11 of the reality show Food Network Star. The man's from Louisiana, and his barbecue sauce is spicy and full of sass.

Of course I tasted the sauce in a lot of ways. Grilled chicken slathered with the stuff is great, by the way, truly great. Meatloaf sandwiches with BBQ-mayo got thumbs-up from my hubby. But what could I do to bring that BBQ taste to something non-traditional?

There I was, sipping peach iced tea, nibbling the last BBQ chicken leg, and suddenly the idea arrived - what about a BBQ-peach tea jam? It would be a little sweet, a little spicy, and have all the flavors of summer. What would a jam be like? Or if I didn't put in extra fruit, would it be a jelly?

I call it jam, and it's fabulous. It's dark and thick, with a texture like apple butter. You can't call this stuff a jelly, it's just too robust and opaque for that. And the taste - wow! It goes well with any sharp cheese, with pork from chops to roast to cold ham. Make a sandwich with ham, sharp aged Cheddar, thin slivers of apple, and this jam, and your tastebuds will sing to you.

This makes a quite small batch of jam: you'll most likely end up with 2 8-ounce jars (seal these) and about half a jar (stick that in the refrigerator and use it first!) You'll find that a small batch goes together amazingly quickly.

Sweet Peach Tea Jam
by Maurita Plouff blogging at Get the Good Stuff!
Makes 2 8-ounce jars, plus a bit extra

Prepare the jars:
First, prepare 3 8-ounce jars. They need to be super clean, so if you have a dishwasher with a "sterilize" cycle use that, otherwise, put clean jars in a pot of hot water, making sure to cover the jars by 2 inches. Bring the water to a big rolling boil, and keep it boiling for 10 minutes. Turn off the heat. Carefully take the jars from the hot water, and set them upside down on a clean kitchen towel. Cover the pot of hot water, you'll need it again.

Make the jam:
Now for the jam itself: Combine the peach tea, BBQ sauce, lemon juice, and pectin in 2 quart pot, and set it over high heat. Bring this mixture to a full rolling boil, stirring often. A full boil is so strong that you can't make the bubbles go away no matter how much you stir.

Add all the sugar at once, stirring to dissolve it. Return the pot to a full rolling boil. Boil hard 1 minute, stirring constantly, then remove from heat.


Ladle the hot jam into the jars, leaving one-half inch space at the top. You'll probably have 2 full jars and one partway filled. Wipe off the jar rims and put on lids. Screw on bands finger tight. Set aside the partly filled jar to cool; this one will go into the refrigerator. The others will be sealed in a waterbath process. 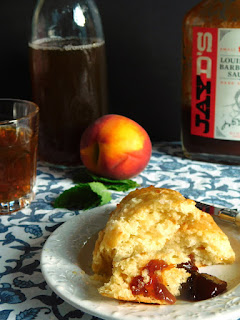 Seal the jars:
Carefully lower the closed jars back into the pot of hot water, and bring the pot back to a full boil. Boil the filled jars for 10 minutes (set a timer!) Remove the jars and let stand on that folded kitchen towel again. As the jars cool, you'll hear a cheerful ping! sound when the lids snap into a seal.

That's it! Your sealed jars will keep in a cool dark cupboard for 6-9 months, but I predict you'll eat it all up long before that.
37 Cooks members receive products from our sponsors to work with to create their posts; no other compensation is given. All content is solely the opinions of our members. Members also write non-sponsored posts that do not feature any products. These are not compensated in any way..