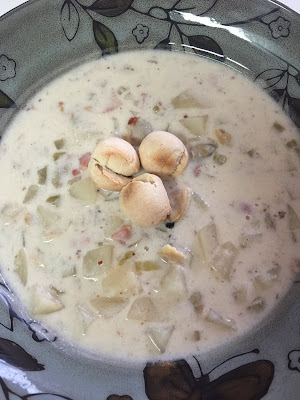 I live in Pennsylvania these days, but I grew up in Kennebunkport Maine. Each region in New England has their own style of clam chowder. Within those regions, each family has their own recipe for clam chowder. My family always argues about who in the family makes the best clam chowder. I have always loved my mother’s version. It is thinner chowder, not the thick “pudding” chowder I have seen where I live now. I can’t eat that! One problem I faced making this chowder for the Instant Pot challenge was meeting the richness of the milk we had delivered when I lived in Maine as a child. But, I figured a bit of a thickener would work, without changing the flavor of the chowder. If you are happy with thinner chowder, just skip it. My other challenge was not having access to my beloved “steamers”, also known as Ipswich clams. Little neck clams got the job done! I was really impressed with the Instant Pot and the cooking options to use one pot to get this wonderful chowder completed! 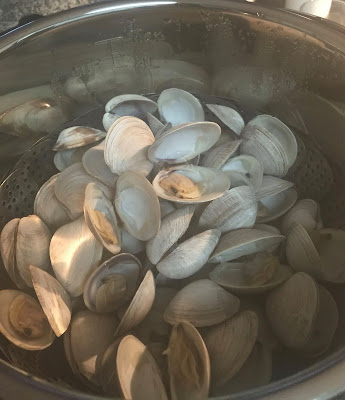 Clams can release sand when cooked. I put the clams in a bowl, covered them with cold water and gave them a scrub with my hands. This doesn’t necessarily guarantee sand-free clams. Put a steamer basket in the Instant Pot liner, add the clams and pour in 3 1/2 cups water. Cover the pot and set to Steam for 6 minutes. QR. Every clam in the Instant Pot opened! Transfer the clams to a large bowl and strain the clam broth through cheesecloth, or 2 layers of white paper towels into another bowl. Reserve the clam broth. Remove the clams from their shells and place in a small bowl. Add about 1/2 cup of strained clam broth to the clams. Letting the clams rest in the broth will remove any additional sand and keep the clams moist. Clean the liner and return to the Instant Pot.

Set the Instant Pot to Sauté, normal heat. Add 1 Tablespoon of the butter, the salt pork and bacon. Sauté, stirring frequently, until the fat has rendered and the bacon is crispy, approximately 7-9 minutes. Add the onion, celery and white wine. Continue to sauté until the onion is soft and translucent and the wine has almost completely evaporated, about 6-8 minutes. Turn off the Instant Pot. Add the bay leaf, season with pepper and add the potatoes. Pour in the strained clam broth. If there is not enough clam broth to cover the potatoes, add water as needed. Cover the pot. Set Manual pressure for 6 minutes. QR. In a small bowl, whisk the cornstarch and water together to make a “slurry”. (Optional)

The final step! Remove the bay leaf. Set to Sauté, less heat. Return the clams to the pot. Stir in the milk, cream and slurry, (if using). Stir constantly until the chowder thickens. Add the last Tablespoon of butter and stir until melted. Check for seasoning, adding salt and pepper as desired. Ladle the chowder into bowls and top with soup crackers. Serve immediately.
37 Cooks members receive products from our sponsors to work with to create their posts; no other compensation is given. All content is solely the opinions of our members. Members also write non-sponsored posts that do not feature any products. These are not compensated in any way..