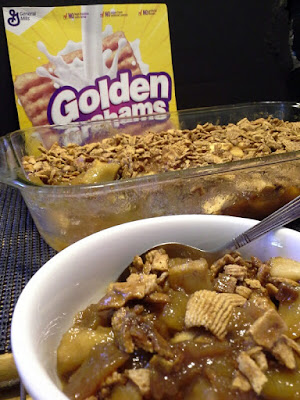 My sweetie loves apples...pie, crisps, or just baked in the oven. I decided on this recipe when I tasted the General Mills Golden Grahams.

I knew a typical Brown Betty used bread, so I decided it would be even better using the Golden Grahams. And I was so right. It was so tender on the inside with a beautiful texture that you would not get with bread. And the topping was crispy and inviting. I did not, but this would be so good sitting outside with someone churning some good old fashioned vanilla ice cream to top it with. I hope you try General Mills' new revamped cereals. I have already bought more for future baking.

1/2 stick of softened butter for greasing your pan

Place your apples into a bowl and add the brown sugar and cinnamon. Mix them well. You want them to form a little liquid. This will only take a few moments. 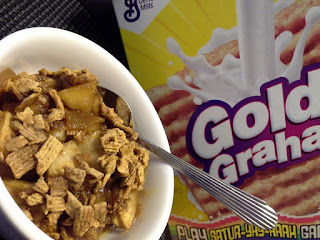 In your pan, place a layer of the apple mixture and top with some of the Golden Grahams that you have broken up. You will continue layering until you end with apples on top. Top them with the whole Golden Grahams. Dot with your sliced butter. Bake, covered with foil, for 30 minutes. Uncover and cook for 20 more minutes, until the Golden Grahams are crisp.

I hope you enjoy this.
37 Cooks members receive products from our sponsors to work with to create their posts; no other compensation is given. All content is solely the opinions of our members. Members also write non-sponsored posts that do not feature any products. These are not compensated in any way..