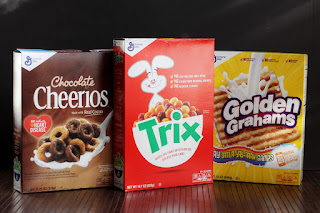 Our current sponsor is an industry giant - General Mills - who challenged us with creating recipes using some of their new-version cereals that have been updated to include absolutely no artificial flavors and no colors from artificial sources.

Each cook received Trix, Golden Grahams and Chocolate Cheerios to work with, and they made both sweet and savory recipes that will tickle your taste buds and amaze you with their creativity. You won't look at cereal boxes the same way again.

General Mills can trace its beginnings back to 1866, when a man named Cadwallader Washburn built his first flour mills on the banks of the Mississippi River. The company eventually revolutionized the milling industry with flour that had superior baking properties.

Today, General Mills is a leader in the cereal industry, making familiar brands like Cheerios, Chex, Lucky Charms, and Wheaties. Even if you're not a breakfast eater - who doesn't love Chex Mix, right?

Want to know more about General Mills? You can follow them on Facebook, Twitter, and Pinterest.
37 Cooks members receive products from our sponsors to work with to create their posts; no other compensation is given. All content is solely the opinions of our members. Members also write non-sponsored posts that do not feature any products. These are not compensated in any way..