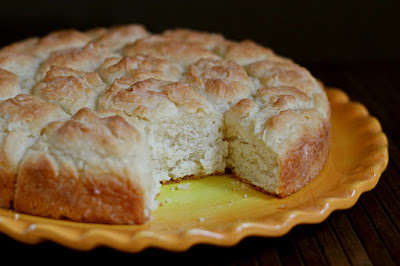 This recipe is from Food52 Genius Recipes, and was created by Shirley Corriher. You might know her as the cooking expert who sometimes appeared on Good Eats.

I've cooked a number of recipes from this book, including Fried Eggs with Wine Vinegar, Potato Scallion Cakes, Spiced Red Wine, Caesar Salad Dressing, Chickpea Stew with Saffron, Yogurt, and Garlic, Pasta with Yogurt and Caramelized Onions, Broccoli Cooked Forever, and Gratin of Zucchini, Rice & Onions with Cheese, and they've all been winners. This was one of my favorites, though. I've made it three times, each time slightly different. So it behaves well, even if you have to adapt a bit.

I've made some biscuit recipes where the dough was pretty wet. But this dough is much wetter than any of those. The book describes the dough as looking like cottage cheese, and that's exactly what it's like - lumpy bits with a thinner "sauce."

Not only were these biscuits good right after I made them, but they were good the next day, and the day after that. Most biscuits get stale pretty quickly, but these stayed good for a few days - which was all the time it took them to disappear. They were particularly amazing when I heated them for a few seconds in the microwave.

I highly recommend this recipe. And I urge you to NOT be worried about how wet the dough is. 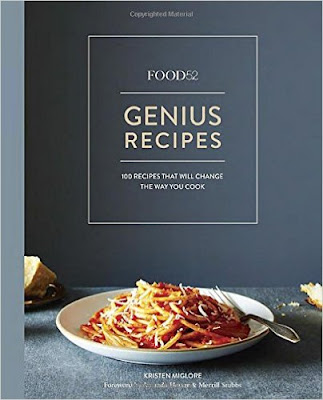 Heat the oven to 425°F with the right slightly below the center of the oven. Spray an 8- or 9-inch round cake pan with baking spray. You could also use butter, but I always have that spray on hand because it's always so handy to have.

In a large mixing bowl, combine the flour, sugar, and salt. Work the shortening in with your fingertips until you don't have any large lumps. Don't get carried away.

Gently stir in the cream, then add the buttermilk until the dough resembles cottage cheese - you might need more or less than 1 cup, depending on the flour you use.

Put the all-purpose flour in a plate, shallow bowl, or pie plate. You don't want to use self-rising flour here, or it will be bitter. Use a medium ice cream scoop (about 2 inches in diameter) start portioning the dough and plopping them into the flour. You can make one at a time, or do 2 or 3, as long as you have space to keep them well separated in the flour. 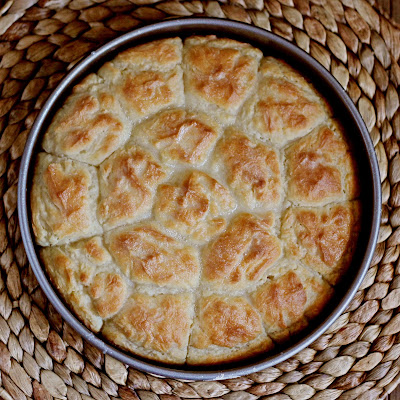 Sprinkle flour on top of the blobs, then flour your hands and grab a blob and gently shape it into a ball, shaking off extra flour as you go. as you finish each biscuit, place it in the prepared pan, scrunched up next to its neighbors. Continue shaping and placing the biscuits until they're all in the pan.

Bake at 425°F until they are lightly browned, about 20-25 minutes. Brush with the melted butter.

Turn the biscuits out onto a plate, then flip again so they're right-side up on another plate. Cut along the seams to separate the biscuits before serving - they don't really pull apart.

*The original recipe calls for 1/4 cup of sugar, but I didn't want them that sweet, so cut back a bit.
37 Cooks members receive products from our sponsors to work with to create their posts; no other compensation is given. All content is solely the opinions of our members. Members also write non-sponsored posts that do not feature any products. These are not compensated in any way..