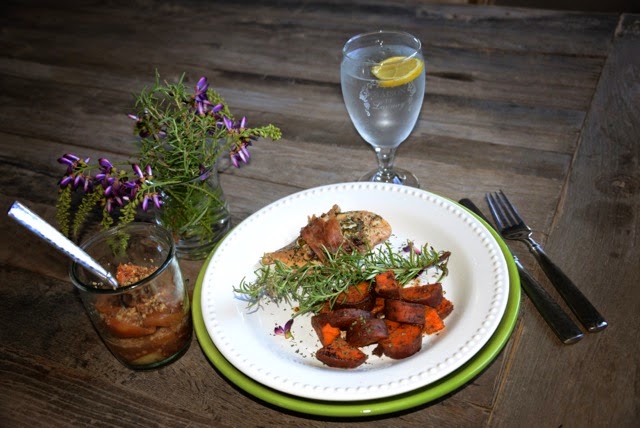 Long are the days of a totally hectic schedule trying to get my three children to their after school activities. Now, my days are anything but quiet, and instead of my three children, I’m helping out with my 8 grandchildren!!! But usually when it’s dinner time now, it’s just my husband and I. We lead VERY active lives between our own work schedules and our fitness schedules. I quite frequently use a slow cooker to prepare things so it’s ready by the time we get home. For the Hamilton Beach Slow Cooker Challenge, I decided to use a meal I created just a few months prior to the challenge. It was perfection and I prepare this quite often.

In a small bowl, mix the goat cheese, 1/2 Tablespoon of rosemary and sea salt and then set aside.

Make a large slit in the thickest part of each of the chicken breast.

Heat the olive oil in a medium skillet and sprinkle the remaining 1 Tablespoon of rosemary in the heated oil along with the sea salt.

When the oil is hot, sear each side of the chicken breast and remove from heat.

When the chicken is cool enough to handle, stuff each breast with the goat cheese mixture.

Wrap each piece of chicken with 1 slice of prosciutto, ending the wrap on the bottom side.

Place chicken in one of the slow cooker bags and pour the remaining olive oil from skillet inside the bag. Place bag on the bottom layer of the slow cooker. Do not seal the bag, but roll it down close to the chicken.

Shake and roll the top down to close.

Place sweet potato bag on top of the chicken bag into the slow cooker.

Slice and cube the apples, leaving the peel on.

Add apples, sea salt, cinnamon and 1 Tablespoon of butter to the third slow cooker bag. Shake to distribute the ingredients. Roll the top of the bag down to close it and place the third bag on top of the other bags.

Place lid on the slow cooker and cook at low setting for 5 hours, but no longer than 6.

Place the walnuts, dates and cinnamon in a food processor and process until it resembles a graham cracker crust consistency. This will keep in a refrigerator for a few weeks and can be used as a topping on the apples to resemble a “crisp”. I personally layer apples with topping and finish off with the nut mixture on top of the apples.
37 Cooks members receive products from our sponsors to work with to create their posts; no other compensation is given. All content is solely the opinions of our members. Members also write non-sponsored posts that do not feature any products. These are not compensated in any way..