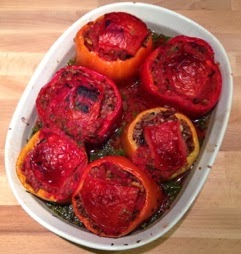 I have made variations on these Turkish-inspired stuffed peppers for years. The version I give here includes meat, but they are 100% delicious without it. Any extra stuffing that doesn't fit in a pepper could be mounded in a hollowed-out zucchini, heaped on a slice of eggplant, or simply eaten as a treat.

Place the cooked and cooled rice in a large bowl, and separate by stirring well. Cut the tops of the peppers off for stuffing, and clean them inside. If needed, cut a very thin slice off the bottom so they'll stand up. Put the peppers in a baking dish that is about as deep as the peppers are tall.

In a large skillet, heat 1 Tablespoon olive oil over moderate heat. Add the ground meat, breaking it up. Brown the meat, stirring well, and when it is cooked, remove it to a plate with a slotted spoon. Pour off the accumulated fat, and discard it.

In the same skillet, heat another Tablespoon of oil, and saute the onions and half the garlic. Season liberally with salt and pepper, and cook, stirring occasionally, for about 5 minutes, until the onions become translucent. Add the coriander, cumin, oregano, cinnamon, and allspice; stir well, and cook not quite a minute, just until the fragrance blooms. Add the chopped cashews, dried fruits, and 1/4 cup of the mint. Cook about 5 more minutes, until very fragrant. Remove from heat; add this mixture to the rice and stir well to combine. Add remaining mint, lemon juice and Aleppo pepper, and taste for seasoning.

Divide the mixture among the 6 peppers, pressing down on the stuffing to pack it well. Pour about half of the tomato sauce over the stuffed peppers. Slice the tomatoes to get curved end-slice ‘caps’, and put one of these tomato caps on top of each pepper. Add 1/2 cup water to the remaining tomato sauce, and pour that into the bottom of the pan.

Bake, uncovered, about 45 minutes. Baste the peppers with the sauce once or twice. While the peppers cook, if the pan seems to be drying out, simply add a little more water to the bottom.

Serve the peppers hot or at room temperature. Drizzle with olive oil and lemon juice, and garnish with more fresh mint leaves.
37 Cooks members receive products from our sponsors to work with to create their posts; no other compensation is given. All content is solely the opinions of our members. Members also write non-sponsored posts that do not feature any products. These are not compensated in any way..