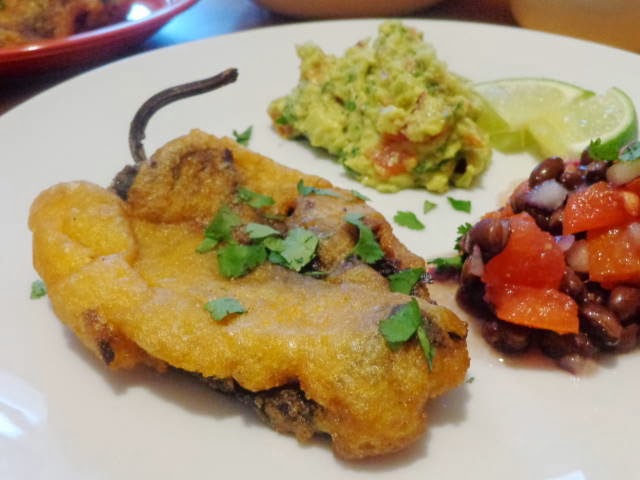 In 2005, I was given a trip to Mexico for my birthday (which one I will not admit to.) I invited my sister, Kerri, and off we went. At the hotel they had day trips, so we picked one to go see the Mayan Ruins, Chichen Itza. It was brutally hot and it took us four hours through the jungle to reach our destination. After a long day of exploring and praying for cold drinks, we were glad to get on the bus and head back to the hotel to eat. About halfway back, the bus stopped at another tourist shop and the guide announced we were here for a meal and a show. The show was spectacular, with all the dancers weaving their way through the tables and their outfits were so pretty. After the show, everyone was invited to enjoy the buffet. At first I didn't know what to make of a pepper that I grabbed, until I took a bite and almost got up to shake the hand of the man standing behind the table. He didn't look very friendly and had a scowl of boredom on his face, but boy was he a good cook! Instead, I took a few more and just smiled. Surprisingly, he smiled back and for some reason that was enough. Since then, I have made these using different cheeses and coatings and this is my favorite way to eat them...I hope you enjoy them.


Preheat broiler. Make a small slice from the top to almost the bottom of peppers and place peppers on a broiler pan. Broil until the peppers are blistered and blackened in most spots, turning every few minutes. Place peppers in a plastic bag and let sit for about 10 -15 minutes to steam. Carefully remove from bag and peel skin off. Using a small spoon, remove seeds.

Mix the cheddar, salt and pepper and stuff peppers.

Dredge stuffed peppers in flour then into the egg whites. Fry until golden brown and drain on paper towels.

Serve with salsa, guacamole or sour cream.
37 Cooks members receive products from our sponsors to work with to create their posts; no other compensation is given. All content is solely the opinions of our members. Members also write non-sponsored posts that do not feature any products. These are not compensated in any way..